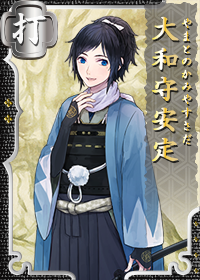 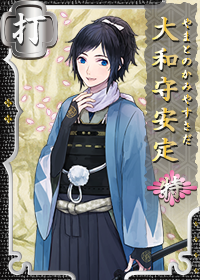 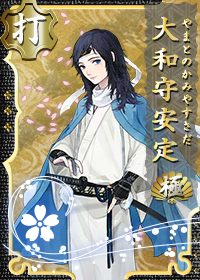 I'm Yamatonokami Yasusada. I'm one of Okita Souji's favorite swords.
I'd say I'm difficult to handle but I'm quite capable. Hope we get along.
Play
Note:
Due to the particular design of the blade it had the ability to cut through things very well, but in turn it was said that only sword experts would know how to truly use it.
Obtained

I wonder who the person who loves me the most is?
Play
Note:
Login (Complete)

Am I that odd?
Play
Note:

You never get tired of patting me, do you?
Play
Note:

Are you playing a different game?
Play
Note:
Citadel (Injured)

I'm in the middle of treatment, please leave me behind.
Play
Note:
Citadel (Kiwame Sendoff)

Well, he has his own life.
Play
Note:
Citadel (Kiwame Prompt)

I have something important to tell you today.
Play
Note:
Formation (Member)

My turn, isn't it? Roger that!
Play
Note:
Formation (Captain)

It'd be nice if I became stronger.
Play
Note:

Thank you, I'll work harder from now on.
Play
Note:

Does this suit me?
Play
Note:
Expedition

It looks like the expedition party is back.
Play
Note:
Smithing

Well, then, I'll recover for next time.
Play
Note:
Refinery

These are the results.
Play
Note:
Merchant

A shop... If it were Kashuu Kiyomitsu, he'd probably be frolicking.
Play
Note:
On the contrary, when you take Kashuu Kiyomitsu to the shop, he acts calm and reserved. Perhaps Yasusada is hinting at his true feelings.
Front Lines & Battles❀
Front Lines

I should get in the right mood... let's sortie! Oraa!
Play
Note:
Resource Discovery

I picked something up.
Play
Note:
Scouting

We're here to search the premises!
Play
Note:
Reference to the famous line Shinsengumi Captain Kondo Isami allegedly shouted at the start of the Ikedaya Raid. Modern equivalent would be "Police! Open up!"
PvP

The main performance... is yet to come!
Play
Note:
Duel

Did you think you could win the duel?
Play
Note:
Boss Node

I wonder if I've become a bit closer to Okita-kun...
Play
Note:
Destroyed

Did you know? Horses have sparkly eyes.
Play
Note:
Fieldwork

A field. I remember the countryside.
Play
Note:
Fieldwork (Complete)

If the one I'm working with is the one I like... it's nothing.
Play
Note:
Sparring

Oh, I'll kill you! Little Kitty!
Play
Note:
The kitten may refer to the story when Okita failed an attempt to cut down a black cat who often visited his garden, realizing how weak he became from tuberculosis.
Sparring (Complete)

Don't you get tired of it?
Play
Note:
Citadel (Injured - Poke multiple times)

It's not really the time for that...Don't you think?
Play
Note:
Smithing (Complete)

Looks like some sort of event is happening.
Play
Note:
Background Change

I have to take it easy.
Play
Note:

I'll be working with you today.
Play
Note:
Omamori Equipped

Are you that...worried I guess?
Play
Note:
Special Lines❀
Welcome Back Greeting (After Long Absence)

Welcome back. Did you go on a trip or something?
Play
Note:
New Year's Greeting

It is New Year's, so I'd like to take it easy for a while.
Play
Note:
Probably meant to be a follow up to Kashuu Kiyomitsu's new year's greeting line.
Omikuji

Hwahahaha! Are you the Oni?
Play
Note:
Setsubun (Cast Beans)

Out with the Oni, in with the good fortune!
Play
Note:

Is that so, we've been together for one year. We have to put more and more spirit into it, right?
Play
Note:
Touken Ranbu's Second Year Anniversary (2017)

This makes it three years. I guess I'll have to keep it together while he's getting all carried away. Let's get along from now on too.
Play
Note:
Again, the "he" in question is Kashuu Kiyomitsu.
Touken Ranbu's Fourth Year Anniversary (2019)

I see, this makes it our fourth anniversary. Having a ball once in a while isn't so bad...
Play
Note:
Play
Play
Touken Ranbu's Fifth Year Anniversary (2020)

Congratulations on your inauguration's first anniversary. Are you accustomed to the circumstances here now?
Play
Note:
Saniwa Second Year Anniversary

Congratulations on your third year. I guess you've gotten pretty good at pretending to be a professional?
Play
Note:
Saniwa Fourth Year Anniversary

I'm Yamatonokami Yasusada. In order to become my master's treasured sword, I went to face my past. I might be difficult to use, but I'm sure that my current master will be able to use me to my full potential. I hope we get along from now on, too.
Play
Note:
Due to the particular design of the blade it had the ability to cut through things very well, but in turn it was said that only sword experts would know how to truly use it.
Obtained

If it's you, I'm certain that you'll be able to master my use.
Play
Note:
Citadel ⚛
Citadel

He's always taking the spotlight, but I'm not losing either, right?
Play
Note:
The "he" in question is Kashuu Kiyomitsu.

Sitting on your lap? Hmm... Won't I be too heavy?
Play
Note:
Citadel (Idle)

To think I would be the captain. Understood!
Play
Note:
Fatigue Recovery (One Bite Dango)

I see, this is the new one.
Play
Note:

This is nice.
Play
Note:

Well, I suppose these results are only natural.
Play
Note:
Expedition (Complete - Leader of Primary Party)

The expedition party is back.
Play
Note:
Smithing

I'll go through as many repairs as needed... to make my master victorious.
Play
Note:
Refinery

Your results up until now are...
Play
Note:
Merchant

Going to the shop once in a while is nice, too.
Play
Note:
Front Lines & Battles⚛
Front Lines

I am a sword, too, after all, so I want to see the abilities of other swords...
Play
Note:
Attacking

This is to make my master victorious!
Play
Note:
Minor Injury

It's just a wound or two...!
Play
Note:
Medium/Severe Injury

You have some nerve, come at me!
Play
Note:
Boss Node

I'm in the middle of self-loathing...
Play
Note:
Destroyed

We took it nice and easy!
Play
Note:
Fieldwork

Lately I've picked up gardening as a hobby, so...
Play
Note:
Sparring

Hahaha! I'll kill you!... Not, but I'll leave you half dead!
Play
Note:
Sparring (Complete)

I need to fix this habit of switching into another personality during battles...
Play
Note:
Ranbu Level⚛
Citadel (Poke multiple times)

An event, are you participating in it?
Play
Note:
Background Change

I need to take it easy.
Play
Note:

I'll be working with you today.
Play
Note:
Omamori Equipped

Thank you. I'm happy that you're worried about me.
Play
Note:
Special Lines⚛
Welcome Back Greeting (After Long Absence)

To be honest, I was worried... I thought maybe you had gotten sick or something and couldn't come back.
Play
Note:
New Year's Greeting

Out with the Oni, in with the good fortune!
Play
Note:

This makes it three years. I don't like it that he's the only one who gets to stand out all the time, so I'll say it too. Take care of us from now on too!
Play
Note:
Touken Ranbu's Fourth Year Anniversary (2019)

I see, this makes it our fourth anniversary. I guess I might as well have a ball too.
Play
Note:

Do you wanna have a ball together?
Play

Congratulation on your inauguration's first anniversary. Let's work hard together from now on, too.
Play
Note:
Saniwa Second Year Anniversary

Congratulations on your second anniversary. Well, you look like you'd be able to master any sword now.
Play
Note:
Saniwa Third Year Anniversary

Congratulations on your fourth inauguration anniversary. I'd like it if you're careful not to slack off, but at times like that I guess I'll be the one to protect you.
Play
Note:
Saniwa Fifth Year Anniversary
Play
Note:
Letters✉
First Letter✎

I left on a journey to become stronger, but
in the end, I ended up at the place of my previous master.....Okita-kun.
I wonder if you're angry at me.
But, please forgive me.
I think that, even now, I have been placing myself at a standstill.
In order to move forward, I have to sort things out in my heart, about Okita-kun.

Okita-kun has collapsed. Just like how I knew it would happen.
And, later on, he'll die without ever stepping foot on the battlefield. Leaving me behind.
Now, come to think of it, perhaps I wanted to disappear together with Okita-kun into the darkness of history, or break before him.
Because soon after, the age of samurai will come to an end,
and I will lose the chance to fulfill my role as a sword.
It leaves me with regrets. But, it can't be helped.

I was scolded by Okita-kun. "What are you doing?", he said.
Of course, it's not because he had any idea who I was.
But, he was aware that I was visiting his sickbed despite being in the middle of an important duty.
"Don't make me the reason for you not fulfilling your duty. It's a nuisance," is what he said.
... That's right.
If I keep looking backwards, it will be of no benefit to anyone.
That's why... I will forget about Okita-kun.
Because that's what he wants.
When I forget him and become a sword that only belongs to you, I'll come back. Definitely.

Retrieved from "https://touken-ranbu.fandom.com/wiki/Yamatonokami_Yasusada?oldid=154362"
Community content is available under CC-BY-SA unless otherwise noted.