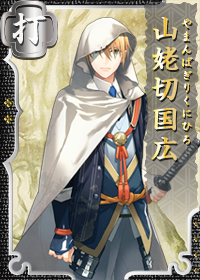 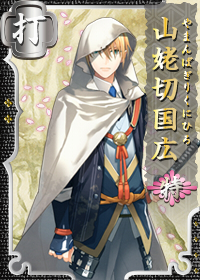 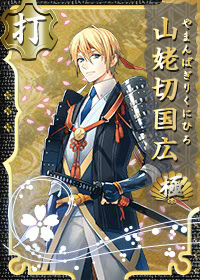 I’m Yamanbagiri Kunihiro. I was forged at the request of the lord of Ashikaga castle, Nagao Akinaga... as a duplicate of Yamanbagiri.
However, I’m no fake! I’m Kunihiro’s first masterpiece...!
Play
Note:
Obtained

I'm Yamanbagiri Kunihiro. ...... What's with the look? Does the fact that I'm a duplicate bother you?
Play
Note:
Opening ❀
Login (Loading)

So, what will you do now?
Play
Note:
Citadel ❀
Citadel

I am not a fake.
Play
Note:

If I were a monster-cutting sword, that would be one thing, but why would you expect spiritual powers from a duplicate?
Play
Note:
Citadel (Idle)

Well, duplicates are something people quickly lose interest in. I know that much.
Play
Note:
Citadel (Injured)

Not being able to move is a problem, yes, but I'd like to at least keep the scars.
Play
Note:
Citadel (Kiwame Sendoff)

Yeah, you should just have good expectations from him from now on. Not from someone like me.
Play
Note:
Citadel (Kiwame Prompt)

Hear me out. I have a favour to ask.
Play
Note:
Formation (Member)

Are you... sure I'm the one you want?
Play
Note:
Formation (Captain)

I wonder what exactly is expected of me.
Play
Note:
Fatigue Recovery (One Bite Dango)

So what you're saying is, you want me to use this?
Play
Note:

I'm doing this because you're the one who ordered it.
Play
Note:

You should go look after the returning expedition instead of bothering with me.
Play
Note:
Smithing

This sword isn't a duplicate, is it?
Play
Note:
Troops Create

This is enough, isn't it?
Play
Note:
Repairs (Minor Injury)

It didn't really matter whether I rusted away or not, you know.
Play
Note:
Refinery

It's not my job to do things like getting rid of the Yamanba.
Play
Note:
Yamanba (山姥) is "mountain witch", the monster which the original Yamanbagiri was used to kill. This feat is what gave the original his name, and it was passed on to the duplicate.
Resource Discovery

I wonder what I should do with this.
Play
Note:
Scouting

What a foul aura. Go and make sure we haven't been surrounded.
Play
Note:
Sortie Kick-off

Every one of my opponents is a blade of fame and renown... and yet I am only...
Play
Note:
Attacking

I don't like the look you're giving me.
Play
Note:

Thought you could kill me with that?
Play
Note:
Medium/Severe Injury

Being bloodied like this is perfect for me.
Play
Note:
Awakening

I'll make you regret slighting me because I'm a duplicate. Repent with your death!
Play
Note:
Duel

I don't care who the opponent is. It doesn't matter as long as I can cut them apart, does it?
Play
Note:
Victory (MVP)

I am myself.
Play
Note:
Rank-Up Toku

...(scoff). No matter how much stronger I get, you still think of me as a nothing but a duplicate, don't you?
Play
Note:
Destroyed

Ahh... I don't want this... Will the comparisons continue even after I disappear...?
Play
Note:
Internal Affairs❀
Please go here for special Internal Affairs interactions
Horsekeeping

... hahaha. Chores are just perfect. No one will compare me to Yamanbagiri now, will they?
Play
Note:
Horsekeeping (Complete)

... This suits me.
Play
Note:
Fieldwork

It'll be impossible to compare me to Yamanbagiri when I'm all covered in mud.
Play
Note:
Fieldwork (Complete)

Haha, no one will call me beautiful now.
Play
Note:
Sparring

Sorry you have to have someone like me as your opponent.
Play
Note:
Sparring (Complete)

Well, I'm glad if I was of any help to you.
Play
Note:
Ranbu Level❀
Citadel (Poke multiple times)

Don't stare at me like that.
Play
Note:
Citadel (Injured - Poke multiple times)

Ugh... You don't intend to repair me? Not that I mind, but...
Play
Note:
Smithing (Complete)

I don't have any opinions on this background change.
Play
Note:
Troops Create (Failed)

This is going badly...
Play
Note:

Now then, I'll be counting on you.
Play
Note:
Omamori Equipped

...Ah, you're back. I thought you had lost interest in a duplicate like me.
Play
Note:
New Year's Greeting

...It's the New Year, huh? Hanging out with me at the very start of the year, you're a strange one.
Play
Note:
Omikuji

Out with the Oni! In with the good fortune.
Play
Note:

I... what am I doing...
Play
Note:
Spring Garden Flower Viewing

... it's the First Year Anniversary today, I was wondering what all the fuss was about. By now, it should be widespread on just what a duplicate is...
Play
Note:
Touken Ranbu's Second Year Anniversary (2017)

Even if it is our second anniversary, I have no intention of changing my clothes. Because if I'm not like this, there will be people to compare me...
Play
Note:
Touken Ranbu's Third Year Anniversary (2018)

……Third year anniversary, is it? I have no intention to be festive and noisy. The fight still continues. Leave that part to me.
Play
Note:
Touken Ranbu's Fourth Year Anniversary (2019)

Your second year inauguration anniversary, is it? Have you become able to value a masterpiece duplicate?
Play
Note:
Saniwa Third Year Anniversary

……I hear it's your third year inauguration anniversary. To use a duplicate like me without hesitation, is that what you call experience?
Play
Note:
Saniwa Fourth Year Anniversary

I’m Yamanbagiri Kunihiro. A sword forged at the request of Nagao Akinaga, Lord of Ashikaga Castle. As Horikawa Kunihiro’s foremost masterpiece, right now I’m a sword that serves you alone. That about covers the important things, huh.
Play
Note:
Obtained

I've stopped thinking about whether I'm a duplicate or whatever. I'm your sword. That alone is enough for me.
Play
Note:
Citadel ⚛
Citadel

I'm not some fake. I'm the masterpiece that serves you. Isn't that right?
Play
Note:

I don't know if I actually have spiritual powers. However, I will guarantee the sharpness of my swordsmanship.
Play
Note:

Haa…… How long should I wait for I wonder?
Play
Note:
Citadel (Injured)

Being used until I'm all beat up is something to be happy about, isn't it?
Play
Note:
Citadel (Kiwame Sendoff)

I look forward to seeing how he's going to return. ...I can't lose either.
Play
Note:
Formation (Member)

Are you fine with me?
Play
Note:
Formation (Captain)

You want me to use this?
Play
Note:

Only 'cause it's your order.
Play
Note:

I'm off. Leave it to me.
Play
Note:
Expedition (Complete - Leader of Expedition Party)

Since they did just return, go look after that bunch from the expedition party.
Play
Note:
Smithing

What kind of sword will it be this time I wonder?
Play
Note:
Troops Create

There's no need to cure this amount, though.
Play
Note:
Repairs (Medium/Severe Injury)

Nn……got to get me properly healed up after all……
Play
Note:
Refinery

Seems like a mission is completed.
Play
Note:
Battle Record

A letter has arrived. Check it will you.
Play
Note:
Merchant

Wanting to show off the fact that I'm "a sword that serves you alone" is, well it's not like I don't get it.
Play
Note:
Front Lines & Battles⚛
Front Lines

What will we do with this then?
Play
Note:
Scouting

What an unsettling atmosphere. This is where we want to change the flow of things.
Play
Note:
Sortie Kick-off

I, am not a fake!
Play
Note:
Minor Injury

I won't die from that.
Play
Note:
Medium/Severe Injury

Getting sullied by blood suits me fine.
Play
Note:
Awakening

I’ll have you thoroughly experience my true worth! Through your death, that is!
Play
Note:
Duel

Now then, come on. I'm right here! Come and get it!
Play
Note:
Boss Node

It doesn't make a difference whoever the opponent is. I just have to cut them, right?
Play
Note:
Victory (MVP)

I am me. You knew that, right?
Play
Note:
Destroyed

If it's master's order, I'm fine with chores too.
Play
Note:
Horsekeeping (Complete)

When you're toiling soil, all of your worries get blown away.
Play
Note:
Fieldwork (Complete)

If you're happy with me then I request a match.
Play
Note:
Sparring (Complete)

Don't stare at me like that.
Play
Note:
Citadel (Injured - Poke multiple times)

You're not going to let me go to repairs yet? ...My cutting edge will remain dull this way.
Play
Note:
Smithing (Complete)

Well, I don't have any opinion on this. Just pick what you like.
Play
Note:
Troops Create (Failed)

Where did I go wrong?
Play
Note:

This is hard.
Play
Note:

Well then, I'll be counting on you.
Play
Note:
Omamori Equipped

Aah, you’ve returned. You’re the only one who can make me shine as a masterpiece, so…… I’m counting on you.
Play
Note:
New Year's Greeting

It's the New Year, huh? I'm grateful that you're taking notice of me early in the New Year.
Play
Note:
Omikuji

Small luck. Just blame it on me.
Play
Note:

Out with the Oni, in with the good fortune.
Play
Note:

Out with the Oni
Play
Note:
Setsubun (After Casting Beans)

You, I hear today's your first year inauguration anniversary. ......I'm counting on you from here on too.
Play
Note:
Saniwa Second Year Anniversary

Second year inauguration anniversary, huh. To be able to properly assess my true worth...... That must be from experience after all, huh?
Play
Note:
Saniwa Third Year Anniversary

So I heard it's the third year inauguration anniversary. You don't pay any mind to whether or not I was a fake and simply try to see the real me. Would that be what they call experience?
Play
Note:
Saniwa Fourth Year Anniversary

We celebrate your fourth year inauguration anniversary today and you still continue to use me. That means you acknowledge me, right?
Play
Note:
A more literal translation of the latter part would be "what your eyes see makes sense to me".
Saniwa Fifth Year Anniversary
Play
Note:
Letters✉
First Letter✎

...I just thought that I wanted to get stronger.
That should be reason enough for me to go training.
If I am stronger than anyone else, I will be evaluated not as the replica of Yamanbagiri, but of myself as an independent entity.
However.
Why is that the tales I hear from the people are different from my memories?

...sorry. I sent out a confusing letter last time due to shock.
To tell the truth, I am still confused even now.
From my memories, I am the replica of Yamanbagiri, the legendary sword who cut through a Yamanba. I myself was not the one who cut down the Yamanba.
However, according to the people I met here, it was because I cut down the Yamanba, that the Chougi sword was named as Yamanbagiri after me.
But if that is so, the entire story has been reversed.
It's as if I, as the replica, has taken over the existence of the real thing.
How- I have no idea how to accept this.

After my previous letter, I finally came to a realization after spending long years listening to the tales of numerous people.
And that is that the legends where I killed the Yamanba or where the real Yamanbagiri killed the Yamanba, they both exist.
Perhaps, it might be because neither killed the Yamanba after all. Hahaha.
The legends told by men are always ambiguous.
It all feels stupid now, for me to have been worried about stuff like being a replica, or about the legends of killing the Yamanba.
I am the masterpiece forged by Horikawa Kunihiro, and I am here now with you watching over me.
And that is the really important thing to me now.
I have cleared my doubts. I will return to the citadel.

Retrieved from "https://touken-ranbu.fandom.com/wiki/Yamanbagiri_Kunihiro?oldid=156127"
Community content is available under CC-BY-SA unless otherwise noted.