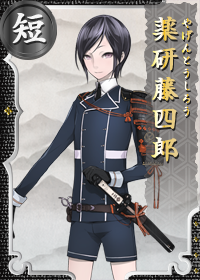 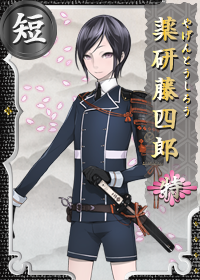 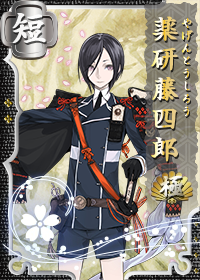 I'm Yagen Toushirou. In spite of my name, unlike my brothers I was raised on the battlefield. Though I don't know much about refined things, when it comes to the battlefield you can rely on me. Well, let's get along, General.
Play
Note:
Yagen's name is written with [薬] which means medicine and [研] which means research, so it roughly translates to "Medical Research".
Obtained

Yo, General. I'm Yagen Toushirou. Along with my brothers, I hope to get along with you.
Play
Note:
Opening ❀
Login (Loading)

So how about it, General... Are my brothers doing well?
Play
Note:

If you're worried, take me along. I won't be a hindrance.
Play
Note:

General, are you dozing off? Don't catch a cold.
Play
Note:
Citadel (Injured)

He's realized something too, hasn't he? I look forward to his return.
Play
Note:
Citadel (Kiwame Prompt)

General, I have a favour to ask.
Play
Note:
Formation (Member)

When it comes to taking down the enemy, leave it to me.
Play
Note:
Formation (Captain)

I just have to take care of everyone, right? Understood.
Play
Note:
Fatigue Recovery (One Bite Dango)

Ah, thanks. Got some for my brothers, too?
Play
Note:
Fatigue Recovery (Makunouchi Bento)

With this much food, a long grind will be no problem.
Play
Note:
Equipment

I'm looking forward to the next battle too.
Play
Note:

How nice, how nice.
Play
Note:

I'll be off. What do you want as souvenir?
Play
Note:
Expedition (Complete - Leader of Expedition Party)

I'll leave it to professionals from here on.
Play
Note:
Refinery

My body is getting hotter... General! What is this!
Play
Note:
Mission (Complete)

It looks like we cleared the mission!
Play
Note:
Battle Record

We should find them before we're found.
Play
Note:
Sortie Kick-off

There they are. Let's strike!
Play
Note:
PvP

I'll pierce you 'til the hilt!
Play
Note:
Minor Injury

Not just yet!
Play
Note:

Yes, this strength is nice. I'll protect you no matter what comes, General.
Play
Note:
Destroyed

Hn, well, if it's for the sake of a delicious meal...
Play
Note:
Fieldwork (Complete)

That was a surprisingly fun time.
Play
Note:
Sparring

It's got to be like this!
Play
Note:
Sparring (Complete)

What's up? Calm down and talk to me.
Play
Note:
Citadel (Injured - Poke multiple times)

Going to do a remodel?
Play
Note:
Troops Create (Failed)

That's not it.
Play
Note:

You're going to have to follow my orders in battle, got it?
Play
Note:
Omamori Equipped

Haha. Are you worried about me, General?
Play
Note:
Special Lines❀
Welcome Back Greeting (After Long Absence)

You came back? Well then, where would you like to resume?
Play
Note:
New Year's Greeting

The Oni are our opponents?
Play
Note:
Setsubun (Boss Node)

Even if you're an Oni, I'll pierce you.
Play
Note:
Setsubun (Cast Beans)

Looks like it's been a whole year for us. My brothers are probably making a ruckus, but let them do their thing.
Play
Note:
Touken Ranbu's Second Year Anniversary (2017)

Oh, second year anniversary, eh? I can't believe it, but that passed in a blink of an eye.
Play
Note:
Touken Ranbu's Third Year Anniversary (2018)

Looks like it's our third anniversary. Time to turn over a new leaf!
Play
Note:
Touken Ranbu's Fourth Year Anniversary (2019)

We've made it to our fifth anniversary. We're counting on you!
Play
Note:
Saniwa First Year Anniversary

I'm Yagen Toushirou who traveled to Azuchi and thought over the things that I can do. I plan to put great efforts befitting of my legends so put high hopes on me, General.
Play
Note:
Obtained

I feel like I've made a fresh start. How to put it, I want to try helping people? Once again, please take care of me General.
Play
Note:
Citadel ⚛
Citadel

So how about it. There're many noisy ones in my family, right.
Play
Note:

I was remembering the battlefield. I think my master deserved better, he was a really nice person.
Play
Note:

General, leave your protection to me. I won't let you do things like commit suicide even if you want to.
Play
Note:
Citadel (Idle)

General, are you dozing off? Don't catch a cold.
Play
Note:
Citadel (Injured)

What, frontal injury is an honor. It's not a problem, no issue here.
Play
Note:
Citadel (Kiwame Sendoff)

He went to train for your sake. Watch over him.
Play
Note:
Formation (Member)

Ah, thanks. Got some for my brothers, too?
Play
Note:
Fatigue Recovery (Makunouchi Bento)

With this much food, a long grind will be no problem.
Play
Note:
Equipment

I'll be away for a while. Look forward to the souvenir.
Play
Note:
Expedition (Complete - Leader of Expedition Party)

How was it while I was away?
Play
Note:
Expedition (Complete - Leader of Primary Party)

Looks like a newcomer has come. Have to prepare for welcoming then.
Play
Note:
Troops Create

If it's only this much, I can do something about it myself...
Play
Note:
Repairs (Medium/Severe Injury)

Sorry, but let me rest for a while. General, don't be reckless when I'm not around.
Play
Note:
Refinery

My chest is getting hot.
Play
Note:
Mission (Complete)

It's General's battle record huh. It's quite a thing.
Play
Note:
Merchant

Oops there, this is something good.
Play
Note:
Scouting

As long as it's not a surprise attack, it'll be fine.
Play
Note:
Sortie Kick-off

The importance of daily training, General sure knows it.
Play
Note:
Attacking

Things such as armor are the same as paper!
Play
Note:
Minor Injury

Not yet!
Play
Note:
Medium/Severe Injury

If you value your life, retreat.
Play
Note:
Victory (MVP)

How was it, General.
Play
Note:
Destroyed

If horses are still making fun of me, then I'm still inexperienced or something.
Play
Note:
Horsekeeping (Complete)

Would it be better to make a scarier face...?
Play
Note:
Fieldwork

Does gardening...count as an old person's hobby?
Play
Note:
Sparring

Yeah, it has to be like this.
Play
Note:
Sparring (Complete)

Don't... look so worried. Ngh... Unlike humans, we'll recover right away if we get repaired.
Play
Note:
Smithing (Complete)

General, are you going to participate in the event?
Play
Note:
Background Change

You're going to have to follow my orders in battle, got it?
Play
Note:
Omamori Equipped

Haha, got it, General. I'll come back safe and sound.
Play
Note:
Special Lines⚛
Welcome Back Greeting (After Long Absence)

You came back? Good, good, I was worried your health had deteriorated.
Play
Note:
New Year's Greeting

General, Happy New Year. How about making the first shrine visit after this?
Play
Note:
Omikuji

Even Oni value their lives, do they not?
Play
Note:
Setsubun (Cast Beans)

Yeah, I'm pretty satisfied with this. To the point where I feel like I don't really need any more luck.
Play
Note:
Spring Garden Flower Viewing

General, you like flowers? Ah, no, it's nothing.
Play
Note:
Regiment Battle Team Change

Looks like it's our third anniversary. Let's turn over a new leaf and move towards some new goals.
Play
Note:
Touken Ranbu's Fourth Year Anniversary (2019)

Fourth anniversary, huh? It's an annual event, but by celebrating anniversaries we prepare for the next to come.
Play
Note:
Play
Play
Touken Ranbu's Fifth Year Anniversary (2020)

We've made it to our fifth anniversary. We'll always be counting on you, General!
Play
Note:
Saniwa First Year Anniversary

General, it's your second inauguration anniversary right. From now on too, I'll show that I will be the one to protect General.
Play
Note:
Saniwa Third Year Anniversary

Haha, it's your fourth inauguration anniversary, huh? This is also the accumulation of your daily efforts, General.
Play
Note:
Saniwa Fifth Year Anniversary

Congratulations on the fifth anniversary of your anniversary, General. It's amazing how the days have flown by.
Play
Note:
Letters✉
First Letter✎

Dear General,
Hey, General, are you well?
I am currently in Azuchi. Training means going back to the place of our previous masters.
That's right, I'm at Oda Nobunaga's place.
Although the other swords and people in later eras either put him on a pedestal or fear of him, to me he is just an extremely ordinary and normal person.
Well, I should add that it's at that time, I suppose.

Hmm? You're saying you don't think of Nobunaga as a normal person?
In that case, let me give you an example.
Although he was said to be a revolutionary character who defied the superstitions and faiths of that time by the later generations, that is not correct.
Oda Nobunaga would sometimes use the faiths and sometimes deny the faiths. ... doesn't that mean he's a normal person?
As proof, that person always brought me around when I was still a sword.
—Although I had a sharp edge I would never hurt my master. That was the legend I shouldered.
Don't you think that if he was someone who truly denied superstition, he wouldn't purposely choose me?

It's Tenshou 10th year, 29th May.
I saw off the back of Nobunaga as he left for the capital.
Neither the current me nor the me of that time that is brought around by Nobunaga can change fate.
If the me of this time possessed the mysterious power as stated in my legends,
Nobunaga might not have ended in suicide.
Well, there is no point thinking about it.
What's left is, the result of me being carried by Oda Nobunaga, but he still ended up cutting his stomach open in the end, that's all.
But the current me is not just a sword of protection to be brought about.
Now that I can move by myself, there are a lot of things I can do.
I should head back now. All I need to do is just to do the things that only the current me can do.

Retrieved from "https://touken-ranbu.fandom.com/wiki/Yagen_Toushirou?oldid=154367"
Community content is available under CC-BY-SA unless otherwise noted.