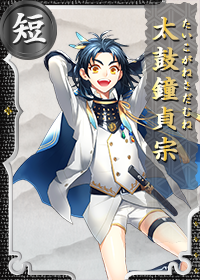 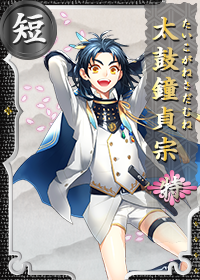 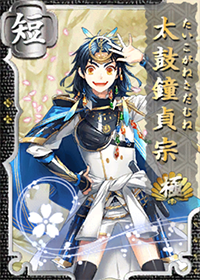 I'm Taikogane Sadamune! I'm a sword used by Date Tadamune! How's this engraving? It's flashy and cool, right? Ah, the story behind my name? What was it again... I don't really remember. Well, it has a nice ring to it so whatever!
Play
Note:
Obtained

I kept you all waiting! Hehehe. Just kidding. I'm the rumored Sada-chan!
Play
Note:
This line will only be heard when obtaining him for the first time.

Fighting is a one in a lifetime big performance. So to dress up for it is natural, right?
Play
Note:

It was so fun when Micchan was around. I wanna hang around with him again!
Play
Note:
Citadel (Idle)

Aw man, I let you see me in such a disgraceful state.
Play
Note:
Citadel (Kiwame Sendoff)

What is that guy going to look like? Looking forward to it.
Play
Note:
Citadel (Kiwame Prompt)

Hey, Master! There's a tiny thing I want to ask you about.
Play
Note:
Formation (Member)

It's okay if I make it merry right?
Play
Note:
Formation (Captain)

Hehhe, this means I can do it flashily yeah?
Play
Note:
Fatigue Recovery (One Bite Dango)

The hard part about being the one keeping everyone excited is that you can't let yourself look tired!
Play
Note:
Fatigue Recovery (Makunouchi Bento)

This thing eh, how to wear it best...
Play
Note:

While I'm away, perhaps the headquarters will end up looking more plain!
Play
Note:
Expedition (Complete - Leader of Expedition Party)

I tried to make it according to my tastes!
Play
Note:
Repairs (Minor Injury)

Sorry for showing you such an unsightly state.
Play
Note:
Refinery

A once in a lifetime big performance. Let's do this in style!
Play
Note:
Resource Discovery

Let's hit where the enemy's let their guards off, eh? That way it will look cool, right?
Play
Note:
Sortie Kick-off

This might be only a rehearsal, but don't go easy!
Play
Note:
Attacking

Gotta do this in style!
Play
Note:
Minor Injury

This is bad... my outfit...
Play
Note:
Awakening

Haha! For a game-changing moment like this, it's good to be flashy!
Play
Note:
Boss Node

Heh heh, this is the moment of truth. Shall we go in with our everything?!
Play
Note:
Victory (MVP)

If you're gonna go wild in style, you have to get along with horses!
Play
Note:
Horsekeeping (Complete)

All right, I'll be counting on you during battles!
Play
Note:
Fieldwork

After the harvest, I'll cook for you.
Play
Note:
Sparring

Come at me however you want. Let's do this!
Play
Note:
Sparring (Complete)

Are you that curious about my clothes?
Play
Note:
Citadel (Injured - Poke multiple times)

Sorry but... Can you stop...
Play
Note:
Smithing (Complete)

Look, something seems to be starting!
Play
Note:
Background Change

You're kidding me...
Play
Note:

Uwaaah... I had confidence in that one...
Play
Note:

Hmmm... Did I go overboard with the decorations?
Play
Note:
Horse Equipped

Hehe! Now I can go wild in style without getting cold feet!
Play
Note:
Special Lines❀
Welcome Back Greeting (After Long Absence)

Oh, you're back. I wonder what happened. Well, whatever it was, let's do it with style!
Play
Note:
New Year's Greeting

Medium luck. Wish it was a little flashier, you know?
Play
Note:

I'm Sada-chan, who came from a peach!
Play
Note:
A reference to the Story of Momotaro. Momotaro came out from a peach and he was involved in demon extermination as well.
Setsubun (Boss Node)

Peaches are said to be effective as charms against evil.
Play
Note:
Spring Garden Flower Viewing

So it's our fifth anniversary! Make sure to watch out for all our stylish moves!
Play
Note:
Saniwa First Year Anniversary

Today, the leader should take the leading role, so you should dress up louder, you know?
Play
Note:
Saniwa Second Year Anniversary

I am the Taikogane Sadamune who became a big hit as an excitement provider after going to Sendai! Just because I'm a tantou, I have no intention of keeping anything small! Let's go wild in style!
Play
Note:
Obtained

A change of clothes and a flashy greeting! How's my new wardrobe?
Play
Note:
Citadel ⚛
Citadel

Hey, Master. Aren't those clothes boring? Want me to pick out something for you?
Play
Note:

When it comes to clothes, it's fine if you think you're too flashy. Otherwise you won't stand out.
Play
Note:

If I died wearing dull clothes, then other people would think I'd lived a dull life up until that moment.
Play
Note:
Citadel (Idle)

Sorry. Can you let me change my clothes for a bit? If I stay like this I can't be cool at all.
Play
Note:
Citadel (Kiwame Sendoff)

I wonder what type of clothing to show his determination he will wear then he comes back.
Play
Note:
Formation (Member)

So I'm the excitement provider! Leave it to me!
Play
Note:
Formation (Captain)

Leave it to me. Now that I've got my energy back, I'll get everyone hyped up!
Play
Note:
Fatigue Recovery (Makunouchi Bento)

How should I use this to show off?
Play
Note:
Expedition

Leave it to me! I will leave a lasting impression at the expedition site!
Play
Note:
Expedition (Complete - Leader of Expedition Party)

Yo, newbie! Let's get along!
Play
Note:
Troops Create

Even if it's a little frayed, if left alone it will look shabby!
Play
Note:
Repairs (Medium/Severe Injury)

Sorry. Can you let me change my clothes for a bit? If I stay like this I can't be cool at all.
Play
Note:
Refinery

Don't we have any plans for more flashy success?
Play
Note:
Merchant

To go out to battle is a sword's time to shine! Let's go in style!
Play
Note:
Resource Discovery

Let's hit where the enemy's let their guards off, eh? That way it will look cool, right?
Play
Note:
Sortie Kick-off

This may be a rehearsal, but don't go easy!
Play
Note:
Attacking

Gotta do this in style!
Play
Note:
Minor Injury

Damn it, this isn't cool at all.
Play
Note:
Awakening

Even if my clothes are in tatters, I will show you my success!
Play
Note:
Duel

We're just about to have a once in a lifetime grand show! Gotta make this super flashy!
Play
Note:
Boss Node

Hehe, the real deal is just ahead. Let's keep our spirits up!
Play
Note:
Victory (MVP)

How's that? Do I look awesome?
Play
Note:
Destroyed

If your horse doesn't move as you want it to, then you won't be the star of the show!
Play
Note:
Horsekeeping (Complete)

A life without delicious food is a life not worth living.
Play
Note:
Fieldwork (Complete)

Being hospitable is all about cooking with seasonal ingredients!
Play
Note:
Sparring

Come at me. I'll show you some spectacular moves!
Play
Note:
Sparring (Complete)

I don't really get it, but let's enjoy it!
Play
Note:
Background Change

Hmm... I had confidence in that one, though.
Play
Note:

Eehh. The decoration is important, though.
Play
Note:
Horse Equipped

Hehe! Now I can go super wild in style without getting cold feet!
Play
Note:
Special Lines⚛
Welcome Back Greeting (After Long Absence)

Oh, you're back. I wonder what made you return. I get it, get it. You missed flashy little me, didn't you?
Play
Note:
New Year's Greeting

Medium luck. Wish it was a little flashier, you know?
Play
Note:

You demon, wait for me.
Play
Note:
Setsubun (Cast Beans)

Our showtime! Is about to start!
Play
Note:
Touken Ranbu's Third Year Anniversary (2018)

So it's our fifth anniversary! I know you'll be watching out for all our stylish moves!
Play
Note:
Saniwa First Year Anniversary

Master is the star today, so how about dressing up flashily?
Play
Note:
Saniwa Second Year Anniversary

Yo! Since the person in charge of stirring things up is gone, has everyone become downhearted?
I've written Master a letter to help create some tension!
I'm currently in the Sendai region! Well, that's natural, isn't it?
After I was bestowed upon Date Tadamune, from then on I was always passed down through the Date clan!
I'll train here and become stronger so I can bring even more excitement back to the citadel!

Yo! I thought you might get lonely soon, so I wrote you another letter!
Ah, you might not know this so I'll write it down for you, but Tadamune-sama is really a fantastic person.
After the end of the Sengoku period, he strengthened the foundation of the Date clan while Japan shifted to an era of peace under the shogunate.
Well, it's not flashy, but this sort of person is necessary, too.
That's why I'm the perfect person to have around him, so I can liven things up!

Yo! I've collected my thoughts, so I wrote this letter!
Masamune-sama's got a lot of flashy stories about him, but maybe that was his tribute to the end of the Sengoku era.
Towards a time period that was rapidly becoming more docile, at least this feeling of wanting to fight back is something I can't understand.
If that's the case, then it seems like I'm heading in that kind of direction too.
As I thought, you can't do things in a small way.
I'm going to return to the citadel at the most opportune time, so keep your hopes up for me!

Retrieved from "https://touken-ranbu.fandom.com/wiki/Taikogane_Sadamune?oldid=171964"
Community content is available under CC-BY-SA unless otherwise noted.