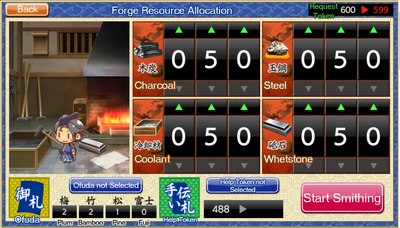 . Each smithing also requires a Request Token (依頼札). All of them can be obtained by fulfilling Missions, or through Expeditions and the Front Lines.

Using Ofuda (御札) will increase your chances of getting a rare sword, but does not guarantee doing so. Ofuda can be obtained through certain Missions or purchased in the Shop.

Extensive trial data has generally indicated that factors such as player level, sword leader, and leader level have little to no effect on the result. The primary factor appears to be the recipe chosen for Smithing.

Listed below are sample recipes that have great likelihood of creating a particular type of sword. It is important to note that using specific recipes only increases the chances of getting a certain type of sword, but that other types of swords will still be obtainable.

The percentages listed in the remarks are based off of experimental data[1], and as such may not be 100% accurate.

Bear in mind that the type of sword you will obtain is random, so the chances of obtaining the sword you desire may be fairly low.

Each sword requires a certain amount of time in order to be forged. The timer you see after forging a sword can be used to potentially identify the type of sword being made. Swords in a 'Limited Time' row can only be currently forged during smithing campaigns.

The second tab of the Forge, labeled [刀解], brings up a menu that allows you to select unwanted swords for destruction. Dismantling swords will provide you with a very small amount of resources, which varies based on what type of sword you are dismantling.

Consuming swords at the Refinery is generally a more cost-effective way to get rid of extra swords, unless you have no swords that need their stats boosted.

Swords must fulfill the following conditions to show up as a sword to dismantle:

Swords that are dismantled will have any equipped troops and horses automatically removed and returned to the inventory.

The breakdown of resources obtained per sword dismantled is as follows:

Retrieved from "https://touken-ranbu.fandom.com/wiki/Smithing?oldid=178915"
Community content is available under CC-BY-SA unless otherwise noted.