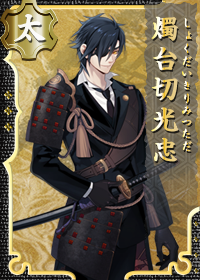 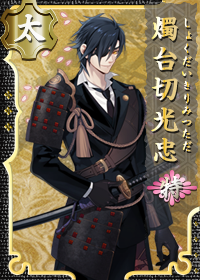 I'm Shokudaikiri Mitsutada. I'm a katana that was once used by Lord Date Masamune.

I don't harbor any bad feelings towards Lord Masamune, but my name comes from a time when I killed someone and happened to cut a candlestick that was nearby at the same time...


Although it really was a bronze candlestick holder, it would've been cooler if it had been something a bit more durable.
Play
Note:
His name literally translates to "candlestick-slasher Mitsutada."
Obtained

I'm Shokudaikiri Mitsutada. I can cut through even bronze candlestick holders... Yeah, that's not cool at all.
Play
Note:
Opening ❀
Login (Loading)

It should be my turn soon, right?
Play
Note:
Login (Complete)

I want to do things with style!
Play
Note:
Citadel ❀
Citadel

You've always got to make yourself presentable. You never know when someone's going to be looking.
Play
Note:

It seems like I'd get along with Hasebe-kun well enough. But he hated his original owner, so it's hard to talk to him.
Play
Note:
Heshikiri Hasebe's original owner was Oda Nobunaga. Shokudaikiri Mitsutada was once owned by Oda Nobunaga before being handed off to Date Masamune.

You shouldn't slack off just because you're bored.
Play
Note:
Citadel (Injured)

If I don't get patched up soon... it'll be really uncool.
Play
Note:
Citadel (Kiwame Sendoff)

I'm looking forward to seeing his new outfit.
Play
Note:
Currently bugged in-game; his dialogue box text is "せっかく彼が君のために着飾ってくるっていうんだ。期待して待たないとね。" but the audio is the one shown above.
Formation (Member)

Ah, I just have to support everyone, right?
Play
Note:
Formation (Captain)

Nominating me? Then I'll do my best to answer your expectations.
Play
Note:
Fatigue Recovery (One Bite Dango)

This seasoning... Hehe, I can't lose to this either.
Play
Note:
Fatigue Recovery (Oiwaijuu Bento)

It's fun to even just look at food that looks delicious.
Play
Note:
Equipment

I wonder how I should wield this with style.
Play
Note:

Okay. Leave it to me.
Play
Note:

I'm back. I've done all that I can.
Play
Note:
Expedition (Complete - Leader of Primary Party)

Looks like an expedition team has returned.
Play
Note:
Smithing

I've made something cool in my style.
Play
Note:
Repairs (Minor Injury)

It seems, the mission is complete.
Play
Note:
Battle Record

I see, I see. So this is your battle record?
Play
Note:
Merchant

If you waste your money, I won't lend you any of mine, okay?
Play
Note:
Date Masamune had huge reserves of gold in his domain of Sendai and often boasted about it. Many daimyô were jealous of him.
Front Lines & Battles❀
Front Lines

Catching them off guard and taking them down... Well, something like that would be ideal.
Play
Note:
Sortie Kick-off

A sword of Mitsutada, the founder of the Osafune school...Here I come!
Play
Note:
The Osafune school of swordmakers is one of the largest and most famous. Its founder, Mitsutada, made many swords bearing his name, including Shokudaikiri Mitsutada.
PvP

It'd really be uncool if we went easy on them just because it's practice.
Play
Note:
Attacking

I want to do things with style!
Play
Note:

I'm made for battle, you see!
Play
Note:
Critical Hit

Whatever defenses you have are useless!
Play
Note:
Minor Injury

This... is within my expectations.
Play
Note:
Medium/Severe Injury

At this rate... I can't show off like this!
Play
Note:
Duel

It's time. Is everyone prepared?
Play
Note:
Victory (MVP)

I think I've become stronger than before.
Play
Note:
Destroyed

It's a sword's fate to fall in battle. But even so... like this, I can't show off anymore, huh...?
Play
Note:
Internal Affairs❀
Please go here for special Internal Affairs interactions
Horsekeeping

I'll be counting on you in battle, okay?
Play
Note:
Fieldwork

It'd be nice if they grew up to be delicious.
Play
Note:
Fieldwork (Complete)

After I finish harvesting, do you want me to cook for you?
Play
Note:
Sparring

There are a few things I want to try out. Want to give me a hand?
Play
Note:
Sparring (Complete)

You can't do that. Being too persistent isn't good, you know?
Play
Note:
Citadel (Injured - Poke multiple times)

A repair room opened up. Is there anyone waiting for his turn?
Play
Note:
Specific event banner introduction

Oh? It seems that something is starting.
Play
Note:
Background Change

Remodeling? Do you mind if I share my opinions too?
Play
Note:
Troops Create (Failed)

Darn... I put too much force.
Play
Note:

I had confidence in that one, though.
Play
Note:
Horse Equipped

Thank you. I'll bring this back.
Play
Note:
Special Lines❀
Welcome Back Greeting (After Long Absence)

Oh, welcome back. I was worried something had happened to you... That's right. A lot of people here feel pretty down if you're not around.
Play
Note:
New Year's Greeting

Now then, it's the start of the highlight scene!
Play
Note:
Touken Ranbu's First Year Anniversary (2016)

Even though you say it's been one year, I guess I haven't changed much? I'm always careful with my daily grooming and appearance after all.
Play
Note:
Touken Ranbu's Second Year Anniversary (2017)

Everyone's being festive with it being the second anniversary. Well, if it's today then it's okay, yeah?
Play
Note:
Touken Ranbu's Third Year Anniversary (2018)

It's the third anniversary. Let's brace ourselves and work hard this year, too.
Play
Note:
Touken Ranbu's Fourth Year Anniversary (2019)

Fourth anniversary, huh? We can't all be in the mood for celebration, so I'll have to keep a cool head in their place.
Play
Note:
Play
Play
Touken Ranbu's Fifth Year Anniversary (2020)

It's your inauguration's fourth anniversary. I say this every year, but you've done your best.
Play
Note:
Saniwa Fifth Year Anniversary
Play
Note:

Retrieved from "https://touken-ranbu.fandom.com/wiki/Shokudaikiri_Mitsutada?oldid=154403"
Community content is available under CC-BY-SA unless otherwise noted.