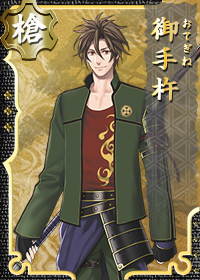 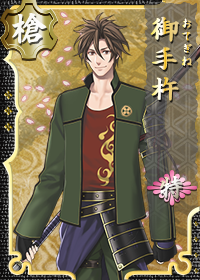 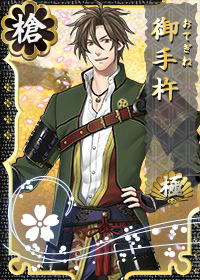 I am one of the Three Great Spears. Call me Otegine. My spear body is bigger and heavier than the other two, but my specialty is my functionality in piercing.

For that reason, I got the name from my thin and elongated, pestle-like scabbard... which was just fine, at first.


Because of the Sankin-kotai, they made me a huge scabbard to emphasize my name, and it is really, really heavy...
Play
Note:
The Three Great Spears are three spears forged by the greatest blacksmiths in Japan. The other two are Tonbokiri and Nihongou.


See expedition notes below for explanation about Sankin-kotai

One of the world's three great spears. Otegine. I can't do stuff like slicing or knocking down enemies but I won't lose when it comes to stabbing them!
Play
Note:
Opening ❀
Login (Loading)

Ahh, this scabbard is so troublesome...
Play
Note:
Login (Complete)

I hope I'll get a turn this time.
Play
Note:
Citadel ❀
Citadel

Beside stabbing, I have no other talent. I get along better with wakizashi than other spears.
Play
Note:

Even though I'm one of the Three Great Spears, I'm the only one without many stories. I've got no reputation.
Play
Note:

I was huge when I was a spear, but now I've become like this. It doesn't feel right.
Play
Note:
Otegine's spear is around 12 feet tall.
Citadel (Idle)

Hey, master... There's something I'd like to talk about.
Play
Note:
Formation (Member)

Ohh, is it okay to choose me?
Play
Note:
Formation (Captain)

Eh, I only have to lead the procession and that'll be okay?
Play
Note:
Fatigue Recovery (One Bite Dango)

It's good so long as it's not heavy.
Play
Note:

Don't choose equipment just based on how it looks, okay?
Play
Note:
Expedition

Is this Sankin-koutai? ...What, it's not?
Play
Note:
Sankin-koutai (参勤交代) was a policy by the Shogunate for most of the Edo period where various Daimyo had to move periodically between Edo and his territory, typically spending alternate years in each place. His wife and heir were required to remain in Edo as hostages.
Expedition (Complete - Leader of Expedition Party)

I'm back. Is this good?
Play
Note:
Expedition (Complete - Leader of Primary Party)

I have no skill other than piercing, so don't complain about the result, okay?
Play
Note:
Repairs (Minor Injury)

Nn? Ah, well this much can't even be called rust.
Play
Note:
This phrase is probably a reference from a story of the Matsudaira Clan (松平氏). Otegine was highly treasured by the Matsudaira Clan, so if there's even a speck of rust on the spear, a maintenance would be immediately carried out. At that time, if the sword maintainer found and repaired the rust, the Matsudaira Clan would give them a raise in salary as an incentive. However, since the appearance of rust meant the maintainer was negligent in the upkeep, admitting it was equal to shaming themselves. Thus, if there was slight rust on the spear during inspection, the maintainer would say that it was not rust and repair it in secret while refusing any pay raise from the clan.
Repairs (Medium/Severe Injury)

Aa, this will take some time, won't it...
Play
Note:
Refinery

I got stronger... didn't I.
Play
Note:
Mission (Complete)

So this is your war record. I see.
Play
Note:
Merchant

By bringing me along while you shop, it seems like you're showing off?
Play
Note:
Front Lines & Battles❀
Front Lines

What's this? Can we use it?
Play
Note:
Scouting

I'll leave scouting to you. I can't do anything except stab things.
Play
Note:
Sortie Kick-off

Like passing through an eye of a needle!
Play
Note:
Minor Injury

This injury is no big deal!
Play
Note:
Medium/Severe Injury

I can't lose to the other two!
Play
Note:
Duel

Ah... in this situation, it's my opportunity, isn't it?
Play
Note:
Boss Node

Me? Is it okay that I'm the best?
Play
Note:
Rank-Up Toku

... Ah. Like this, even compared to those two, surely...
Play
Note:
Destroyed

I had a vague idea it'd end up like this... well, this too, is fate huh......
Play
Note:
Internal Affairs❀
Please go here for special Internal Affairs interactions
Horsekeeping

That horse, it definitely didn't think I was a spear...
Play
Note:
Fieldwork

Like I said, I can only pierce things, something like farming is impossible!
Play
Note:
Fieldwork (Complete)

I ended up going along with it and tilling... What're you making a spear do...
Play
Note:
Sparring

I'm requesting your assistance for sparring so my blade will not get dull.
Play
Note:
Sparring (Complete)

What is it, poking things is my job, ain't it?
Play
Note:
Citadel (Injured - Poke multiple times)

Oh, what kind of notice is it?
Play
Note:
Background Change

Remodeling? Like I said, I'm no good at anything besides stabbing.
Play
Note:
Troops Create (Failed)

Well, it would turn out like this...
Play
Note:

Fu~Fu-n~ Today I'll have you listen to what I tell you to do.
Play
Note:
Omamori Equipped

An Omamori? Am I that unreliable?
Play
Note:
Special Lines❀
Welcome Back Greeting (After Long Absence)

You finally came back! Yeah, shall we go to war? I can't wait to use my skills.
Play
Note:
New Year's Greeting

Happy New Year's. There are a lot of people busy drinking sake and cooking... So, am I your partner today?
Play
Note:
Omikuji

Wonder what it'll be like to face an Oni...
Play
Note:
Setsubun (Cast Beans)

Out with the Oni! In with the luck!
Play
Note:

When you're tall, the flowers are closer. It's nice, hehe.
Play
Note:
Regiment Battle Team Change

Heh, it's already our First Year Anniversary. I guess now's not the time for me to say that stabbing is my only saving grace......?
Play
Note:
Touken Ranbu's Second Year Anniversary (2017)

I see, so it's the second anniversary, eh? To commemorate, everyone could do something like parade...ah, never mind. Just pretend you didn't hear that.
Play
Note:
Touken Ranbu's Third Year Anniversary (2018)

It's our third anniversary. I'm only good for stabbing, but I'll work on increasing my range of skills from here out!
Play
Note:
Touken Ranbu's Fourth Year Anniversary (2019)

Congrats on your second anniversary! Just like that, find a stage where I can shine, will you?
Play
Note:
Saniwa Third Year Anniversary

One of the Three Great Spears, who got back from the nostalgic Yuuki clan, Otegine.

My military exploits may not be as impressive as when I was a spear, but I can just build that up from now on.

Otegine of the Three Great Spears has just returned. I feel like I can pierce as many enemies as I want now!
Play
Note:
Citadel ⚛
Citadel

I have to look up when I'm with the other spears and ootachi, so my neck hurts...
Play
Note:

I can't manage without support from wakizashi.
Play
Note:

Don't make a scabbard to match my name, okay? It's huge and heavy and troublesome.
Play
Note:
Citadel (Idle)

Hey! You sure we don't have to go to battle? HEY!
Play
Note:
Citadel (Injured)

Hm? Oh. He'll be back soon, right? It's not like he left for Sankin-Koutai.
Play
Note:
Formation (Member)

Sure. Leave it to me.
Play
Note:
Formation (Captain)

Yeah, sure. I'll do great as one of the Three Great Spears.
Play
Note:
Fatigue Recovery (One Bite Dango)

Don't choose equipment just based on how it looks, okay?
Play
Note:

I like small and functionally compact equipment.
Play
Note:

I'll make good use of this in battle!
Play
Note:
Expedition

Since it's a regular expedition, I don't have to put on a heavy scabbard, right?
Play
Note:
Expedition (Complete - Leader of Expedition Party)

I hope it's someone I can get along with.
Play
Note:
Troops Create

This might take longer than expected.
Play
Note:
Refinery

You're doing your job properly, huh? Ah, no, I wasn't doubting you or anything!
Play
Note:
Battle Record

So this is your war record! I see.
Play
Note:
Merchant

I don't mind. "Don't waste your money" is the only advice I can give you, though.
Play
Note:
Front Lines & Battles⚛
Front Lines

What's this? Can we use it?
Play
Note:
Scouting

I'll leave scouting to you. I'll pierce through the gap of the enemy's formation!
Play
Note:
Sortie Kick-off

I can't skewer them when it's training. My real worth...
Play
Note:
Attacking

Anyone who goes near me will be skewered!
Play
Note:
Critical Hit

As if impaling the eye of a needle...!
Play
Note:
Minor Injury

Wha⁠— This isn't the time for...!
Play
Note:
Awakening

Come at me. I'd be skewering you before your blade could even reach me, though.
Play
Note:
Boss Node

Beyond this point is the enemies' headquarters...
Play
Note:
Victory (MVP)

As a weapon, rather than burning inside a storehouse... Falling in battle is a far better end...
Play
Note:
Internal Affairs⚛
Please go here for special Internal Affairs interactions
Horsekeeping

Alright. I just have to care for the horses, right?
Play
Note:
Horsekeeping (Complete)

Horse... I'll get even with you in battle and remind you that I'm a spear!
Play
Note:
Fieldwork

Come at me as you like. It'd be pointless otherwise.
Play
Note:
Sparring (Complete)

Okay, I got a hang of the distance. This will work.
Play
Note:
Ranbu Level⚛
Citadel (Poke multiple times)

Are you going to let me rest or play with me? Pick one...
Play
Note:
Smithing (Complete)

Oh, is that an event where I can succeed?
Play
Note:
Background Change

Ah, this is no good.
Play
Note:

Well, I figured this would happen.
Play
Note:
Horse Equipped

Dear Master,
Man, Shimosa sure is nostalgic! It's been several hundred years, I think?
Lord Yuuki Harutomo, the one who had me made, was from here so it feels like I came back to my hometown.
Well, I can't just be having a good time.
As one of the Three Great Spears of Japan, I have to obtain strength that won't lose to Nihongou and Tonbokiri.
...Wait, is that Lord Hideyasu I see?

Dear Master,
I'm doing great under Lord Hideyasu.
But the thing is, I'm having doubts whether I'll become stronger this way.
Lord Hideyasu was a man of great military prowess and the perfect person to wield me back when I was a spear.
Unfortunately, he wasn't blessed to achieve military exploits in war.
...In other words, I won't have any chance to gain battle experience if I stay here.
Even so, I won't lose to Tonbokiri at least.
The East-West comparison was originally between me and Nihongou anyway...
...No no, I can't be discouraged!

Dear Master,
I finally understand why I came here.
Lord Hideyasu was impeccable in military prowess and character. However, he was tossed about by his inescapable fate and couldn't become a ruler despite being the second son of Lord Ieyasu.
――And now, at the age of 34, he died due to illness.
There was a need for me to be present and witness that regret.
Whatever happens to me from now on, Lord Hideyasu will never know. This might be just for my self-satisfaction but in Lord Hideyasu's stead...
If the spear he wielded becomes the best, wouldn't Lord Hideyasu win fame as well?
Hey Master, will you help me become the best spear?

Retrieved from "https://touken-ranbu.fandom.com/wiki/Otegine?oldid=170428"
Community content is available under CC-BY-SA unless otherwise noted.