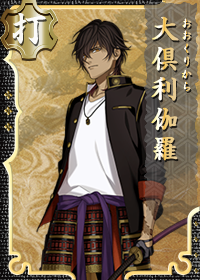 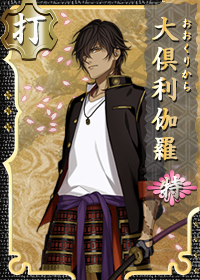 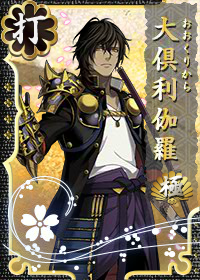 ...I am Ookurikara. Made by Hiromitsu of the Soushu school, my previous Master was Date Masamune. My name comes from the Kurikara dragon carving. ...Other than that, there's nothing much else for me to talk about. At any rate, I am just an unsigned sword.
Play
Note:
The Soushu school is the school of sword smithing that began in the late Kamakura period. Hiromitsu was a prominent swordsmith of the Soushu school.

The Kurikara dragon is one of the manifestations of Fudou Myouou, a legendary Japanese deity. It is often depicted as a dragon coiled around a flaming sword, eating its tip. A mumeitou (無銘刀) is a sword that lacks its sword smith's signature. The signature is a symbol of the maker's pride in his work.

A sword may 'become' a mumeitou if it has been shortened, since the nakago (the grip part) where the signature usually would be is the part that will be cut off, which is likely Ookurikara's case.
Obtained

...I am Ookurikara. I don't have much to talk about. Because I don't intend on getting friendly.
Play
Note:
Opening ❀
Login (Loading)

I will fight alone, and I will die alone.
Play
Note:
Login (Complete)

I don't intend on getting friendly.
Play
Note:
May also be "I don't plan to conspire with you."
Citadel ❀
Citadel

If you don't need anything from me, then please leave me alone.
Play
Note:

Sorry, but I'll choose where I die. Orders are unnecessary.
Play
Note:

If you want to be friendly, please do it with Mitsutada or Sadamune. I'm different from those guys.
Play
Note:
Ookurikara is referring to Shokudaikiri Mitsutada and Taikogane Sadamune, two other blades also owned by Masamune.
Citadel (Idle)

...Ok. That's one, onto the next wound.
Play
Note:
Citadel (Kiwame Sendoff)

Whatever happens to him, has nothing to do with me.
Play
Note:
Citadel (Kiwame Prompt)

...Tch. So you found me. I had intended to leave without telling you.
Play
Note:
Formation (Member)

I don't intend on getting friendly.
Play
Note:
Formation (Captain)

I'll use this as I please, all right.
Play
Note:

As long as it can be used, it's good enough.
Play
Note:
Expedition

Hmph... So it's not a battle.
Play
Note:
Expedition (Complete - Leader of Expedition Party)

The expedition team is being noisy.
Play
Note:
Smithing

It's nothing worth resting over, you know.
Play
Note:
Repairs (Medium/Severe Injury)

Wherever it is that I go, it is my business.
Play
Note:
Refinery

With this power, I can...
Play
Note:
Mission (Complete)

I have no interest in your battle records.
Play
Note:
Merchant

I'm not going to go with you, all right.
Play
Note:
Front Lines & Battles❀
Front Lines

I'm going. You guys can come as you please.
Play
Note:
Resource Discovery

I'll fight by myself. You guys do whatever you want.
Play
Note:
Sortie Kick-off

Training...? This is the very definition of getting friendly.
Play
Note:
Attacking

I can see right through you.
Play
Note:

Me, by myself, is enough.
Play
Note:
Minor Injury

Is that it?
Play
Note:

Tch... looks like I misread the situation.
Play
Note:
Awakening

I'll decide where I die! Not the likes of you!
Play
Note:
Duel

I am always fighting by myself. This is not any different.
Play
Note:
Boss Node

With this, me by myself is enough, right?
Play
Note:
Destroyed

I'll take care of my own horse. It's only natural.
Play
Note:
Horsekeeping (Complete)

...Why am I caring for other people's horses too...
Play
Note:
Fieldwork

I don't intend on getting friendly.
Play
Note:
Sparring (Complete)

I don't intend on getting friendly, but I haven't gone easy on you, either.
Play
Note:
Ranbu Level❀
Citadel (Poke multiple times)

Make somebody else do this.
Play
Note:
Horse Equipped

Although I said I will fight alone, a horse is necessary.
Play
Note:
Omamori Equipped

So you're back. I was wondering whether to consider a way to fight without you.
Play
Note:
New Year's Greeting

This atmosphere... is annoying. Just because it's New Year's doesn't mean I intend to get friendly.
Play
Note:
Omikuji

Are you going to draw a fortune?
Play
Note:

It doesn't matter who the enemy is.
Play
Note:
Setsubun (Cast Beans)

Two years? So it has been that long already. Not that anything will be different.
Play
Note:
Touken Ranbu's Third Year Anniversary (2018)

You've been fighting for three years already, huh. ...Hmph. Not that anything will be different.
Play
Note:
Touken Ranbu's Fourth Year Anniversary (2019)

......Four years, huh? That much time has passed since we began our battle.
Play
Note:

...So you entered your first inauguration anniversary too, huh. Not too bad.
Play
Note:
Saniwa Second Year Anniversary

Second inauguration anniversary, huh.... Even so, don't think you can make me do what you want just because you are.
Play
Note:
Saniwa Third Year Anniversary

......Ookurikara, returned. Unlike the mistaken legend, my present Master will actually take me to battle, right. ...Then, there is nothing more for me to talk about. As long as I'm being used, it will be proven that I am a sharp sword.
Play
Note:
Obtained

You understand as well, don't you, my power? Even without getting friendly, with this I can win...!
Play
Note:
Citadel ⚛
Citadel

What are you expecting from me?
Play
Note:

You decide the battlefield. I decide how I die. Isn't that good enough?
Play
Note:

Talking to me must be boring. There should be others who are better suited for that sort of thing.
Play
Note:
Citadel (Idle)

Swords are tools meant to kill, and be killed. Having come this far, I won't let you say you don't understand.
Play
Note:
Citadel (Kiwame Sendoff)

Don't worry. He'll be coming back to where you are.
Play
Note:
Formation (Member)

I'm going to fight how I like, all right.
Play
Note:
Formation (Captain)

Me, by myself would have been enough, you know.
Play
Note:
Fatigue Recovery (One Bite Dango)

As long as it can be used, it's good enough.
Play
Note:

Hmph. So it's not a battle.
Play
Note:
Expedition (Complete - Leader of Expedition Party)

The expedition team is being noisy.
Play
Note:
Smithing

A new member? As long as they don't get in my way, that is fine.
Play
Note:
Troops Create

I'll leave it up to you to decide how to use it.
Play
Note:
Repairs (Minor Injury)

It's nothing worth resting over, you know.
Play
Note:
Repairs (Medium/Severe Injury)

It's not like I have a death wish. I will be healing my wounds.
Play
Note:
Refinery

With this power, I can...!
Play
Note:
Mission (Complete)

You fight your battles. I'll fight mine.
Play
Note:
Merchant

I'm going ahead. If you're slow I'm leaving you.
Play
Note:
Resource Discovery

I'm going to fight how I like, all right. You guys do whatever you guys like.
Play
Note:
Sortie Kick-off

I don't intend on getting friendly. I'm going to do it with the intent to kill.
Play
Note:
Attacking

Me, by myself, is enough.
Play
Note:
Minor Injury

What, is that all?
Play
Note:

I'll decide where I die. And that, isn't here!
Play
Note:
Duel

Don't make me say it over again. Me, by myself, is enough.
Play
Note:
Boss Node

So it is here. I'll be going ahead.
Play
Note:
Victory (MVP)

There's no need to compare me to the others.
Play
Note:
Destroyed

Something like horsekeeping, I can do it alone.
Play
Note:
Horsekeeping (Complete)

It was unnecessary to help, wasn't it?
Play
Note:
Sparring

Coming this far, words should be unnecessary. We are swords, after all.
Play
Note:
Ranbu Level⚛
Citadel (Poke multiple times)

Has nobody told you that you are restless?
Play
Note:
Citadel (Injured - Poke multiple times)

I leave the citadel matters to you... Isn't that good enough?
Play
Note:
Troops Create (Failed)

Make somebody else do this.
Play
Note:
Horse Equipped

Although I said I will fight alone, a horse is necessary.
Play
Note:
Omamori Equipped

Shouldn't you give that to somebody else?
Play
Note:
Special Lines⚛
Welcome Back Greeting (After Long Absence)

You're the one deciding the battlefield. Without you, we can't do anything.
Play
Note:
New Year's Greeting

I'm fine alone. Just go join everyone else who is in the mood for New Year's.
Play
Note:
Omikuji

Are you going to draw a fortune?
Play
Note:

An oni, is it?
Play
Note:
Setsubun (Boss Node)

Your head is mine.
Play
Note:
Setsubun (Cast Beans)

So... we've been fighting for three years already, huh. ...What a feat, to have come this far.
Play
Note:
Touken Ranbu's Fourth Year Anniversary (2019)

...You lead us for a whole year. Have confidence.
Play
Note:
Saniwa Second Year Anniversary

I didn't intend to write anything like a report, you know.
It's a bother, but it was an order to report to the Master periodically. How annoying.
I've been led to the Sendai Domain for the purpose of training.
Is it not possible to become stronger alone?

My former Master....... I met Lord Date Masamune face to face.
I am said to be the sword Lord Masamune carried in the war camp, but in reality that is wrong.
By the time I arrived at Sendai, there was no way large wars could have happened.
Why in the world did that ridiculous story come to be?

So basically, the strength of a sword does not exist on its own, but depends on the Master, I see.
The greatness of the existence of the Master called Lord Masamune gave birth to a non-existent legend of wars, and that is connected to my current self.
So from the very start, it had been impossible to become stronger alone.
If so, this is not the time to be getting friendly with familiar faces from the past here.
To become stronger than myself up to now, I need you, my present Master.

Retrieved from "https://touken-ranbu.fandom.com/wiki/Ookurikara?oldid=154356"
Community content is available under CC-BY-SA unless otherwise noted.