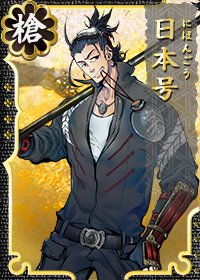 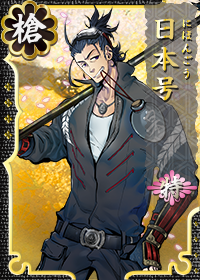 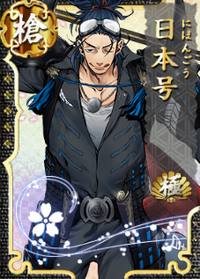 I am one of the world's three great spears, also praised as Japan's best, Nihongou.

If I tell you that despite being a spear, I hold the senior position of the third court rank, you'll understand my greatness, right?

... It's just... I'm known in the society as the spear which was taken away from its owner because he got carried away and drank past his limit.
Play
Note:
Nihongou came into Kuroda Clan's possession because of a drinking bet.
Obtained

I'm the best spear in Japan, Nihongou. I'm barging in. So, how many cups did you drink before I arrived?
Play
Note:
Opening ❀
Login (Loading)

Drink, drink this sake, if you drink... Ugh...
Play
Note:
Nihongou is singing the first verse of the folk song Kurodabushi (黒田節), which mentions how the Kuroda clan obtained Nihongou by drinking.
Login (Complete)

Ohh, have you also come to drink?
Play
Note:

You should drink because you want to, not because others tell you to.
Play
Note:

If you are hitting the bottle with a heavy drinker, make sure you don't get carried away by the mood. If you take it too far, you'll only get crushed.
Play
Note:
See book description.
Citadel (Idle)

Nothing to do... I guess I'll drink.
Play
Note:
Citadel (Injured)

When he comes back perhaps I should give him some tasty sake.
Play
Note:
Citadel (Kiwame Prompt)

Alright, Master. There's something I'd like to talk about.
Play
Note:
Formation (Member)

Well now, I'll show you the strength of being one of the Three Great Spears.
Play
Note:
Formation (Captain)

Well, I am someone with a high position... It's only right for me to be in command, huh?
Play
Note:
Fatigue Recovery (One Bite Dango)

As long as I've got this, I shouldn't get scared even if I meet a tiger, right?
Play
Note:

Should we prepare alcohol for the expedition team?
Play
Note:
Smithing

A newbie? It'd be good if it's someone I can drink with!
Play
Note:
Troops Create

Well, it's something like this, right?
Play
Note:
Repairs (Minor Injury)

Oh, while I was drinking the mission finished, huh?
Play
Note:
Battle Record

Are you going to the liquor store? ...What, you're not?
Play
Note:
Front Lines & Battles❀
Front Lines

Give me a report on the situation. I'll search for an opening.
Play
Note:
Sortie Kick-off

The ones who aren't afraid of one of the three great spears, come forth.
Play
Note:
PvP

Oh, you want to challenge me? Fine, let's do this!
Play
Note:
Attacking

The more you drink, the stronger you get, that's what I'm sayin'!
Play
Note:
Minor Injury

Ack... At the crucial time, my legs got tangled.
Play
Note:
Awakening

This is the reward for violence, don't regret it!
Play
Note:
Duel

Haha! This is getting exciting!
Play
Note:
Boss Node

With this, my alcohol tolerance will be much better... Eh, it's unheard of?
Play
Note:
Destroyed

Ugh ... I lost because I drank too much, don't blame it on my previous master.
Play
Note:
Internal Affairs❀
Please go here for special Internal Affairs interactions
Horsekeeping

Sigh... I don't think I can keep doing this without drinking.
Play
Note:
Fieldwork

Isn't it the first time in the history that a senior court ranking is made to do the fieldwork duty?
Play
Note:
Fieldwork (Complete)

Because it's so different than the battlefield, it seems like I got weird muscle stiffness.
Play
Note:
Sparring

All right. Come at me with zeal.
Play
Note:
Sparring (Complete)

Not bad. Want to review some more over a couple of drinks?
Play
Note:
Ranbu Level❀
Citadel (Poke multiple times)

What is it? Do you want me to share my alcohol?
Play
Note:
Citadel (Injured - Poke multiple times)

This is surprisingly hard...
Play
Note:

Now then, go to the battlefields with me, alright?
Play
Note:
Omamori Equipped

Hahahaha! It's only natural that you want to take good care of the Senior Third Rank.
Play
Note:
Special Lines❀
Welcome Back Greeting (After Long Absence)

Out with the demon, in with the fortune.
Play
Note:

One, two, three. Why don't I have these beans with a drink?
Play
Note:
Regiment Battle Team Change

Cheers to the second anniversary, is it. Well, it's a party so I'm not upping my drinking. To have fun without getting wasted is a skill.
Play
Note:
Touken Ranbu's Third Year Anniversary (2018)

In celebration of our third anniversary, the Senior Third Rank will say a few words... Well, not exactly, but I'll be counting on you again, alright?
Play
Note:
Touken Ranbu's Fourth Year Anniversary (2019)

Heh, it's the first anniversary of your inauguration. Well, as is expected of the owner of the world's three great spears.
Play
Note:
Saniwa Second Year Anniversary

It's the second anniversary of your inauguration? Are you having a drink too? I'm not forcing you though.
Play
Note:
Saniwa Third Year Anniversary

Hou. Third anniversary of your inauguration, eh? Got it, got it. You've done a great job.
Play
Note:
Saniwa Fourth Year Anniversary

Drinking is fine, but stay away from bets. You can't complain no matter what is taken from you.
Play
Note:

Even if you're confident in your alcohol tolerance, you shouldn't push yourself.
Play
Note:

Those who become my master are all nutso in some way.
Play
Note:
Horsekeeping (Complete)

I'll assess your moves for you.
Play
Note:
Sparring (Complete)

I know how it feels to start wanting the sake that someone is savoring.
Play
Note:
Citadel (Injured - Poke multiple times)

Oh, the smithing finished while I was drinking.
Play
Note:
Repair (Complete)

This is surprisingly hard.
Play
Note:

Sorry about that.
Play
Note:

Alright, fight together with me.
Play
Note:
Omamori Equipped

Hehehe. It's natural that you'd want to treasure me.
Play
Note:
Special Lines⚛
Welcome Back Greeting (After Long Absence)

You're back. I probably reek of alcohol but do forgive that. With you gone, drinking is the only thing left for me to do.
Play
Note:
New Year's Greeting

Oh, your first inauguration anniversary, eh? True, you do have the capacity to make me follow you.
Play
Note:
Saniwa Second Year Anniversary

Second inauguration anniversary, huh? Alright, this one's a toast for you. No complaining that this is the same as usual.
Play
Note:
Saniwa Third Year Anniversary

Alright, so this is Chikuzen, huh? The townscape in this era sure brings back memories.
Going on a journey to train is great and all, but I don't think training at this point will change anything when I'm already celebrated as the best spear in Japan.
For now, I'll have a drink as I relish this nostalgic scenery.

Good grief.
As I was spending my time drinking, a samurai who happened to pass by gave me an earful.
He said, "Why are you, a Kuroda warrior of all people, drinking in broad daylight instead of working? Do you not think that that will disgrace your Master?"
I'm a spear though, not a warrior.
Not that he'd believe me if I said that.
See, I know a stubborn fellow who refused to listen to other people.
That's right. He was my former master. The one who went by the name Mori Tahee.

Maybe I really rubbed him the wrong way or maybe this is just fate,
but since then Tahee has been giving me an earful at every opportunity.
That said, everything he told me is right.
That my actions must not disgrace my Master.
...All this time, my attitude towards you was defiant in some way.
You must have thought I'm arrogant about my being the best spear in Japan and having a court rank.
Well, it is an established fact that I am a Great Spear, so I probably should show that I am worthy of that title.
Guess I'll return to the citadel before Tahee starts yelling at me again.

Retrieved from "https://touken-ranbu.fandom.com/wiki/Nihongou?oldid=172413"
Community content is available under CC-BY-SA unless otherwise noted.