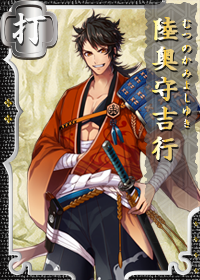 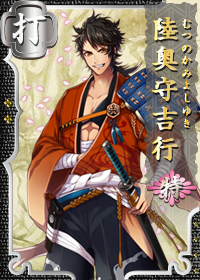 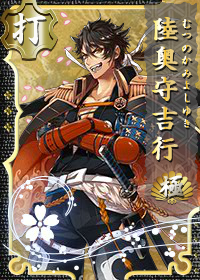 I’m Mutsunokami Yoshiyuki. Right, right, I’m known as the sword that Sakamoto Ryōma carried.
I gained a reputation in Tosa as a famous sword, but in Ryōma’s period, swords had already become old-fashioned.
But hey, that’s the world for you.
Play
Note:
Sakamoto Ryōma was a prominent figure in overthrowing the Tokugawa Shogunate during the Bakumatsu period. One of his most noted accomplishments was uniting the two powerful rival provinces, Chōshū and Satsuma, against the Bakufu.
Tosa was an old province ruled by the Chōsokabe clan in the Sengoku period. Tosa is known today as the Kōchi Prefecture.
Obtained

Guns are of this period. Swords are so old-fashioned.
Play
Note:

I'll most likely end up quarreling with those Shinsengumi swords. Those guys, I wonder if they can keep up with the times.
Play
Note:
The Shinsengumi (新選組) was a special police force organized by the Bakufu during the Bakumatsu period. Historians have described this force as a "ruthless murder squad".

Do ya' have a goal?
Play
Note:
Citadel (Idle)

Not doing anything at all seems like such a waste...
Play
Note:
Citadel (Injured)

Hehhehehe, my clothes are already tattered from the beginning, so there's not much of a difference!
Play
Note:
Line removed as of Feb. 18, 2015

Gahahaha! What kind of clothes is he gonna come back with!
Play
Note:
Citadel (Kiwame Prompt)

For today, I'd have an important talk
Play
Note:
Formation (Member)

Mahahahaha! Leave it to me!
Play
Note:
Formation (Captain)

I'm the leader!? Ya totally get me, don't ya?!
Play
Note:
Fatigue Recovery (One Bite Dango)

When you're tired, this sweetness is unbeatable~
Play
Note:
Fatigue Recovery (Makunouchi Bento)

For me, I think it's enough if I have this gun, right?
Play
Note:
Mutsunokami's master was known to favor guns and worked in the navy. See Trivia.

I wonder if I can equip something like cannons.
Play
Note:

I wonder what kind of newbies we'll have.
Play
Note:
Troops Create

Ouch, this is bad, so let me rest.
Play
Note:
Refinery

Since ya've gone out of y'ar way to do it, ya' can't just ignore it.
Play
Note:
Battle Record

If it's a business talk, leave it to me.
Play
Note:
Front Lines & Battles❀
Front Lines

Battles, huh... If it's really necessary, I guess it can't be helped...
Play
Note:
Resource Discovery

It'll be all over if we're surrounded! Be careful!
Play
Note:
Sortie Kick-off

A daily tactical research is needed, so it can be tested out here!
Play
Note:
Attacking

The gun is mightier than the sword, yeah!
Play
Note:
Possible reference to Hol Horse's quote from Jojo's Bizarre Adventures.

All I need is to win, right?
Play
Note:
Minor Injury

Quiet down!
Play
Note:
「ほたえる」is the Tosa-ben word equivalent to 「騒ぐ」 (to be noisy, to cause a ruckus). It's said that when Sakamoto Ryouma heard the sounds of his bodyguard, Yamada Toukichi, being assassinated, he yelled 「ほたえな」because he thought Yamada was just being noisy. Unfortunately, this revealed Ryouma's location to his assassins.

This is bad.
Play
Note:
Awakening

What's with the air in here...nothing but the smell of blood, and death.
Play
Note:
Victory (MVP)

Right, right, because there's no law that says ya' can't use swords as farming tools.
Play
Note:
During the Meiji Restoration, swords were prohibited from being carried around in public. With the exception of former lords, military and law enforcers, violators would had have their swords confiscated.
Fieldwork (Complete)

Phew, that really took a lot of time to complete.
Play
Note:
Sparring

There's no helping it even if we're training swords at this time, huh?
Play
Note:
Sparring (Complete)

Next one! Next!
Play
Note:
Horse Equipped

I'm counting on ya. Take care of me, yeah.
Play
Note:
Omamori Equipped

What? You're such a worrywart.
Play
Note:
Front Lines Sortie
Play
Note:
Special Lines❀
Welcome Back Greeting (After Long Absence)

Ooh! Ya've returned! I thought somethin' might've happened to ya! Well, battles non-stop can really get ya' down. A change of pace is necessary!
Play
Note:
New Year's Greeting

Is our opponent the Oni?
Play
Note:
Setsubun (Boss Node)

Out with the Oni! In with the good fortune!
Play
Note:

I see. It's been two years for us today, huh? But, we won't stop yet, will we!
Play
Note:
Touken Ranbu's Third Year Anniversary (2018)

Oh! With this, it's been three years! There've been lotsa new faces, but we'll keep on counting on ya'!
Play
Note:
Touken Ranbu's Fourth Year Anniversary (2019)

Gahahahaha! With this it's a full year for ya'! Can't keep looking forever like a newbie now, can ya'!
Play
Note:
Saniwa Second Year Anniversary

Gahahaha! With this, it'll be your third anniversary. You're a true pro by now!
Play
Note:
Saniwa Fourth Year Anniversary

Congratulations on your fourth inauguration anniversary! This is the result of your daily hard work!
Play
Note:
Saniwa Fifth Year Anniversary

I'm Mutsunokami Yoshiyuki. I've returned from Tosa, after thinking about things regarding the new era. The age of swords ended long ago, but I'll keep fighting for the dawn of the next era!
Play
Note:
Obtained

Whaーt, I was just responding to your earnestness, s'all. Let's seize the world together!
Play
Note:
Citadel ⚛
Citadel

Someday, this gun will also be obsolete. It's important to look forward to that.
Play
Note:

I will try more and more new things!
Play
Note:

Goals are better the bigger they are. Like the world!
Play
Note:
Citadel (Idle)

In preparation for the future, maybe I should practice the abacus...
Play
Note:
Citadel (Injured)

Hahahaha, I've been wearing ragged outfits before, so there's not much of a difference!
Play
Note:
Citadel (Kiwame Sendoff)

Don't worry. There are times when a man must change!
Play
Note:
Formation (Member)

Mahaha! Leave it to me!
Play
Note:
Formation (Captain)

I'm here to take you to a new era!
Play
Note:
Fatigue Recovery (One Bite Dango)

Even more than guns, I want newer equipment!
Play
Note:

I wonder if you can equip things like warships?
Play
Note:

I wonder what the newcomer is like.
Play
Note:
Troops Create

This ain't the time to be messing around... Let me rest!
Play
Note:
Refinery

Since ya've gone out of your way to do it, ya' can't just ignore it.
Play
Note:
Battle Record

What are ya' planning to do from here?
Play
Note:
Merchant

With business negotiations, once they've gotten the better of you, it's over!
Play
Note:
Front Lines & Battles⚛
Front Lines

This, too, is for the sake of seizing the world. I'll steel my resolve!
Play
Note:
Resource Discovery

I'd like to get in a good attack from here...
Play
Note:
Sortie Kick-off

A daily tactical research is needed, so it can be tested out here!
Play
Note:
Attacking

The gun is mightier than the sword, yeah!
Play
Note:

If it's to win, I'll do anything, yeah?
Play
Note:
Minor Injury

I thought I was gonna die there...!
Play
Note:
Awakening

I've drawn my sword... it's over for you!
Play
Note:
Duel

Well, s'all thanks to my gun!
Play
Note:
Destroyed

Because from this era on, it's old-fashioned for swords to act just as swords!
Play
Note:
Horsekeeping (Complete)

The time when the role of horses changed was just around then too, wasn't it...?
Play
Note:
Fieldwork

The time for swords to become obsolete, and for farm tools to take their place is right around the bend.
Play
Note:
Fieldwork (Complete)

Phew, that sure was a fulfilling bit of time spent.
Play
Note:
Sparring

Bring it on. This'll be a good workout.
Play
Note:
Sparring (Complete)

It's good to have a change of pace, hey.
Play
Note:
Troops Create (Failed)

Ah no~ I was careless.
Play
Note:

The next one! The next!
Play
Note:
Horse Equipped

I'm counting on ya. Take care of me, yeah.
Play
Note:
Omamori Equipped

Gahaha! ! Even without this I'd make sure to come home safe!!
Play
Note:
Front Lines Sortie
Play
Note:
Special Lines⚛
Welcome Back Greeting (After Long Absence)

While ya' were away, did ya' accomplish anything big? If ya' did, that's enough.
Play
Note:
New Year's Greeting

Happy New Year! Come on, ya should go get seated at the banquet.
Play
Note:
Omikuji

Out with the Oni! In with the good fortune!
Play
Note:

There! Let's do this in one go!
Play
Note:
Touken Ranbu's Fourth Year Anniversary (2019)

Gahahahaha! With this, it's been one year for ya'! We'll be counting on ya' from here on out, too!
Play
Note:
Saniwa Second Year Anniversary

Gahahaha! With this it's your third anniversary. From now on please support us as well.
Play
Note:
Saniwa Fourth Year Anniversary

Congratulations on your fourth inauguration anniversary! If you ask me, I think you'll become a person of even higher caliber!
Play
Note:
Saniwa Fifth Year Anniversary

Dear Master,
Are you doing well? I am writing this letter during my traveling.
Is it strange that I desire to become stronger as a sword and a wide-hearted man, even though I constantly preach about the end of swords and their limits?
However, the battle faced by Master now is one that can only be fought by swords.
In that case, there is a need for me to re-evaluate myself as a sword.
I will write again after a while.

Dear Master,
Are you doing well? I am currently in Tosa.
Since I am a sword of Tosa, the only place I should go is here.
And, I think that there is a need to speak to that person.
My former master, Sakamoto Ryoma.
I am mostly formed by the thoughts of people who think about Ryoma.
Therefore if I tried to overcome my limits, I will most certainly hit a wall.
Well, I'll try to do my best.

Dear Master,
I talked to Ryoma.
He probably thought that I was merely a drunk passerby though.
In the end, whether it's new tools or old, it depends on its usage.
Just because something is new doesn't mean that it is omnipotent; Ryouma died after this, his guns having failed to protect him.
However, if you continue to use an old thing even when you know there are newer stuff, it will just limit your choices.
I will be a sword that fights after careful assessment of the next era.
I have changed so much you might fail to recognize me, look forward to it.

Retrieved from "https://touken-ranbu.fandom.com/wiki/Mutsunokami_Yoshiyuki?oldid=159478"
Community content is available under CC-BY-SA unless otherwise noted.