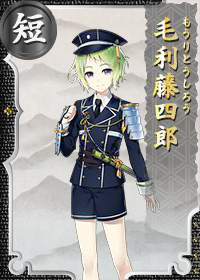 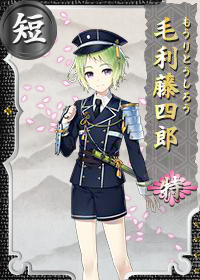 I'm Mouri Toushirou, one of the Toushirou brothers. This name came from my previous master Mouri Terumoto-sama. Written as 'Mouri', in the past it was read as 'mori'.
Play
Note:
Obtained

I'm called Mouri Toushirou, named that because I was in the Mouri clan. From now on let's join forces and do our best!
Play
Note:
Opening ❀
Login (Loading)

Any little ones around, hey?
Play
Note:
Citadel ❀
Citadel

Yes, master. What is it?
Play
Note:

Uwaaa, little kids are so cute, yes? No, my height is another matter.
Play
Note:
Citadel (Idle)

I shall be waiting here.
Play
Note:
Citadel (Injured)

They're on a journey to grow up? Though I think it would be fine if they remained little.
Play
Note:
Formation (Member)

Leading the little ones, is it?
Play
Note:
Formation (Captain)

Protecting the little ones, is it?
Play
Note:
Fatigue Recovery (One Bite Dango)

Does this suit me?
Play
Note:
Expedition

Well then, I'll be off on expedition.
Play
Note:
Expedition (Complete - Leader of Expedition Party)

Ooh! Will this be a little one?
Play
Note:
Troops Create

Give me a little... time please...
Play
Note:
Refinery

A mission has been completed, yes?
Play
Note:
Battle Record

Are you going to buy something like snacks for the little ones?
Play
Note:
Front Lines & Battles❀
Front Lines

We're going off to battle! Let's do our best!
Play
Note:
Resource Discovery

Even if it's just practice, I won't lose!
Play
Note:
Attacking

Can you even see me move?
Play
Note:

Was I hit?
Play
Note:

I... can't afford to worry about my appearance!
Play
Note:
Duel

I'm not... scared or anything.
Play
Note:
Victory (MVP)

I did it! That's my kodomo sappou technique!
Play
Note:
Rank-Up Toku

...What.. It's already over? I... haven't even done anything significant...
Play
Note:
Internal Affairs❀
Please go here for special Internal Affairs interactions
Horsekeeping

There there. ...Yes, the horses were good too.
Play
Note:
Fieldwork

Oops, I got all muddy.
Play
Note:
Sparring

Master, can you calm down first and then talk?
Play
Note:
Citadel (Injured - Poke multiple times)

Master... You worry too much... ugh
Play
Note:
Smithing (Complete)

It looks like smithing is done.
Play
Note:
Repair (Complete)

Master, how will you change it?
Play
Note:
Troops Create (Failed)

Something is off.
Play
Note:

Aah... Do you have a step stool?
Play
Note:
Omamori Equipped

Welcome back! Would you please tell me what happened while you were absent?
Play
Note:
New Year's Greeting

Master, have you finished preparing it? You know, the thing every small child wants...
Play
Note:
Referring to otoshidama, money given to children at New Year's.
Omikuji

You did it! It's great luck.
Play
Note:
Setsubun (Entering Map)

Demons... Are huge after all...
Play
Note:
Setsubun (Cast Beans)

Out with the Oni!
Play
Note:

Out with the Oni! In with the good fortune!
Play
Note:
Setsubun (After Casting Beans)

Is it our third anniversary...? Let's give our best from now on too!
Play
Note:
Touken Ranbu's Fourth Year Anniversary (2019)

It has been a year since your inauguration!? Have you gotten used to the citadel?
Play
Note:
Saniwa Second Year Anniversary

It's your fourth anniversary, Master. Is the citadel completely a part of your every day life now?
Play
Note:
Saniwa Fifth Year Anniversary

Happy fifth anniversary! It's an honor to celebrate it with you every year.
Play
Note:

Retrieved from "https://touken-ranbu.fandom.com/wiki/Mouri_Toushirou?oldid=171955"
Community content is available under CC-BY-SA unless otherwise noted.