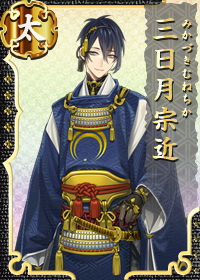 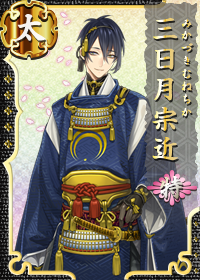 My name is Mikazuki Munechika. I'm one of the five great swords of Japan, and well, I'm also said to be the most beautiful. I was born near the end of the 11th century. I guess you can say I'm an old man. Ha ha ha.
Play
Note:
Mikazuki Munechika is one of the 天下五剣 (Tenka Goken, lit. five swords under heaven), a group of swords famous for their history and beauty. It is currently owned and displayed by the Tokyo National Museum.
Obtained

Mikazuki Munechika. They call me Mikazuki on account of the many patterns on my blade. Please take care of me.
Play
Note:
In this line, Mikazuki explains the origins of his name. Mikazuki (三日月), which is the Japanese word for "crescent moon". This is a reference to Mikazuki's uchinoke (打ち除け), which are patterns or crests on the body of the sword itself. Mikazuki Munechika the sword has many of them, and they are shaped like crescent moons.
Opening ❀
Login (Loading)

Ha ha ha ha ha. Brilliant, brilliant.
Play
Note:
"よきかな" is an archaic expression that can mean slightly different things - such as "delicious", "well done", and "brilliant" - depending on the context. Although there is little context here, we could infer that Mikazuki is commenting on the fact that the game is loading. Hence, the expression has been translated as "brilliant".
Login (Complete)

The admiral is in the base... Hahaha, as expected, that is not quite right, is it?
Play
Note:
"提督が鎮守府に" is a Kantai Collection (KanColle) reference. KanColle is a game published by the same website - DMM, and the concept behind the two games is very similar. KanColle characters are anthropomorphised military ships, while Touken Ranbu characters are anthropomorphised swords.
Citadel ❀
Citadel

Nn... Is this what they call skinship?
Play
Note:
"Skinship" (スキンシップ) is a pseudo-English Japanese word referring to the act of bonding through physical contact. This can be between a parent and their child, between friends, etc.

Ahahaha! It's okay, it's okay, you can touch me.
Play
Note:

Well, for both people and katanas, the bigger the better. Is that not so?
Play
Note:
Citadel (Idle)

It appears that you are sleeping. Well, in that case, I too shall sleep.
Play
Note:
Citadel (Injured)

It appears that you are concerned on account of my injuries. Ah, I am glad.
Play
Note:
Line removed as of Feb. 18, 2015

I am taking a bath.
Play
Note:
Citadel (Kiwame Sendoff)

I hope he'll return sooner or later. If he dies on the way then that's the end for him.
Play
Note:
のたれ死ぬ literally means 'to fall dead on the street' or 'die a miserable death'
Formation (Member)

Ohh, you did well preparing this much.
Play
Note:
Equipment

Fashion is not one of my strong points. I always need to ask other people for help.
Play
Note:
Expedition

I will be off for a little while.
Play
Note:
Expedition (Complete - Leader of Expedition Party)

It appears that a new sword has been forged.
Play
Note:
Troops Create

Nnn~ I do enjoy being taken care of.
Play
Note:
Repairs (Medium/Severe Injury)

I shall go and have this thoroughly taken care of.
Play
Note:
Refinery

It appears the mission is over.
Play
Note:
Battle Record

I shall look at your accomplishments.
Play
Note:
Merchant

Nn, I don't have much of an idea about shops.
Play
Note:
Front Lines & Battles❀
Front Lines

Ha ha ha, I have picked it up.
Play
Note:
Scouting

Let's do this.
Play
Note:
PvP

I do not particularly mind losing.
Play
Note:
Attacking

How is this?
Play
Note:
Minor Injury

Hahahahaha... no, this is no laughing matter, is it.
Play
Note:
Awakening

I'm burning up. Time to go all out, I suppose.
Play
Note:
Duel

Well then, I suppose it's time for me to do work that is worthy of my salary.
Play
Note:
Victory (MVP)

It appears that I have gotten back a little of my strength from days gone by.
Play
Note:
Destroyed

Well, all things are doomed to perish one day. That day happens to be today - that is all there is to it.
Play
Note:
Internal Affairs❀
Please go here for special Internal Affairs interactions
Horsekeeping

Hahaha. What a cute one.
Play
Note:
Horsekeeping (Complete)

The horses seem to like me. It is troubling.
Play
Note:
Fieldwork

Hmm, field labor? So, how do I use this tool?
Play
Note:
Fieldwork (Complete)

Fields are rather difficult to maintain.
Play
Note:
Sparring

I do not particularly mind losing.
Play
Note:
Sparring (Complete)

I'm happy that you care, but getting impatient won't speed up the recovery.
Play
Note:
Smithing (Complete)

It seems like the forging is done.
Play
Note:
Repair (Complete)

It seems like the repair is done.
Play
Note:
Specific event banner introduction

There is a special event.
Play
Note:
Background Change

Is it not supposed to be like this?
Play
Note:

Hmm, will you do as I tell you to? Thanks.
Play
Note:
Omamori Equipped

Hahaha. Although I had been shrunk, I'm still Mikazuki Munechika.
Play
Note:

It's okay, it's okay. You can use me to decorate, or to worship. Although it might not give you anything.
Play
Note:

If we have some tea and cakes, surely we will have a good time together?
Play
Note:
Welcome Back Greeting (After Long Absence)

That's right, seeing the first sunrise of the year, huh. Ah no, because I'm already an old man, I end up waking early.
Play
Note:
Omikuji

Fortune slips? It would be best to do it lightheartedly.
Play
Note:

Well then, shall we try exterminating some Oni?
Play
Note:
Setsubun (Cast Beans)

This ritual to exorcise the Oni is quite the entertaining one.
Play
Note:
Spring Garden Flower Viewing

The flowers are scattering, what a beautiful spectacle...
Play
Note:
Cherry blossoms are a metaphor for human existence. When the flowers bloom, it looks gorgeous and mesmerizing, though short-lived. A reminder, that our lives are so fleeting.
Regiment Battle Team Change

Hahaha. Our first anniversary, is it? But the war is still continuing. We have to carry on working hard to protect history.
Play
Note:
Touken Ranbu's Second Year Anniversary (2017)

We celebrate our third anniversary among quite a few fresh faces. History is such a thing.
Play
Note:
Touken Ranbu's Fourth Year Anniversary (2019)

Now then, this marks our fourth anniversary. Even I do not know where this battle is headed to. However, a sword will simply obey its Master.
Play
Note:
Play
Play
Touken Ranbu's Fifth Year Anniversary (2020)

Hahaha. It's finally the fifth anniversary. We have lived such long lives, but taking on human bodies to assist our masterーas expected it is a completely different experience.
Play
Note:
Saniwa First Year Anniversary

Now, the leader should take the leading role. After all, it's the first anniversary of your inauguration.
Play
Note:
Saniwa Second Year Anniversary

Reaching your second anniversary, Master has become quite impressive. Good. That's how it should be.
Play
Note:
Saniwa Third Year Anniversary

Ooh, so this was the day we commemorate the third anniversary of your inauguration. No no, by no means did I ever forget that.
Play
Note:
Saniwa Fourth Year Anniversary

Master, who seemed to be at a complete loss before, is now at your fourth inauguration anniversary. Dear me, I can feel the quick passage of time.
Play
Note:
Saniwa Fifth Year Anniversary

You know Master, this makes the fifth anniversary of your inauguration. What do you think about history, the flow of time? ーHeh, no, no, you don't have to consider it in a complicated way. But it would be good if you put some care into thinking about it.
Play
Note:

Retrieved from "https://touken-ranbu.fandom.com/wiki/Mikazuki_Munechika?oldid=154378"
Community content is available under CC-BY-SA unless otherwise noted.