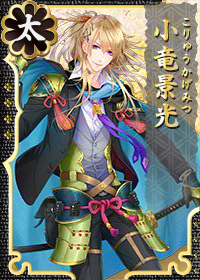 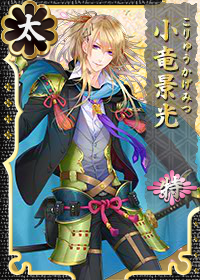 I'm Koryuu Kagemitsu. A Bizen Osafune school tachi, my best feature is my dragon engraving. Originally the engraving was larger, but after I was shortened it got small. But it's cute in its own way, don't you agree?
Play
Note:
Koryuu literally means 'little dragon'.
Obtained

I'm Koryuu Kagemitsu. A wandering traveler roaming about in search of a master... I wonder, are you my master this time?
Play
Note:
Opening ❀
Login (Loading)

You, are you my master?
Play
Note:
Citadel ❀
Citadel

I sure have many nicknames, such as Nankou Kagemitsu and Nozokiryuu Kagemitsu. Call me whatever you like!
Play
Note:
Nankou refers to previous master Kusunoki Masashige, while Nozokiryuu means 'Peeking dragon' after the engraving on the tang that appears to peek out from the hilt.

I choose my owners, you see. It's no good if they're not pure and honest!
Play
Note:
Possible reference to Kusunoki's reputation.

Well then... How should I pass the time during Master's absence...
Play
Note:
Citadel (Injured)

A fellow with a place he must return to will surely come back right away, don't you agree?
Play
Note:
Formation (Member)

Captain, is it... I got it, I got it.
Play
Note:
Fatigue Recovery (One Bite Dango)

It's not that it's unusuable, but...
Play
Note:
Expedition

I'm ba—ck! ...Were you worried about me?
Play
Note:
Expedition (Complete - Leader of Primary Party)

The expedition team's back from their trip, eh.
Play
Note:
Smithing

My eye for blades is something inherited from my former masters, you see.
Play
Note:
Possible reference to sword testing clan Yamada-Asaemon?
Troops Create

Let me see... I wonder what condition it's in...
Play
Note:
Repairs (Minor Injury)

This... looks like it's going to take a while... Sorry about that.
Play
Note:
Refinery

Oh? Is it okay to ignore it?
Play
Note:
Battle Record

Well then, looks like a letter's arrived.
Play
Note:
Merchant

A battle... A battle, is it... Oh, well.
Play
Note:
Resource Discovery

Inform me of the situation. What I've picked up from my past is guerilla warfare, you see.
Play
Note:
Reference to Kusunoki's ingenious tactics and thorough knowledge of the terrain.
Sortie Kick-off

Leave that head for me, yeah?
Play
Note:
PvP

I wonder what attackers will it be this time...
Play
Note:
Reference to Kusunoki's seige defense battles?
Attacking

Shall I cut you down?
Play
Note:

That head of yours, I'm taking it!
Play
Note:
Minor Injury

Haha... Guess I was too provocative there...
Play
Note:
Awakening

Haha, to be cornered and yet still win is a tactic in itself, you know?
Play
Note:
Boss Node

No no, this at least should be expected, no?
Play
Note:
Rank-Up Toku

I've become stronger, huh? Like this, maybe you won't be able to part with me anymore?
Play
Note:
Destroyed

I guess... the search for a master ends here. After all, I'm the one who's dying here, not the master...
Play
Note:
Internal Affairs❀
Please go here for special Internal Affairs interactions
Horsekeeping

I'm done. Are you satisfied with this, Master?
Play
Note:
Fieldwork

Actually, I've been with a farming family before as well, you know.
Play
Note:
Reference to how the blade was once owned by a peasant family in Kawachi during the late Edo period. When presented to famous sword specialist clan Honami for appraisal, it was believed to be a fake.
Fieldwork (Complete)

It looks like smithing has been finished.
Play
Note:
Repair (Complete)

Everyone is really noisy. No, I mean in a good way.
Play
Note:
Background Change

Woah, was I too clumsy?
Play
Note:

Uh? Is it different?
Play
Note:

Oh? If it's not for this, it seems that I would disappear then?
Play
Note:
Special Lines❀
Welcome Back Greeting (After Long Absence)

Good grief. I was wondering if I should start searching for another master again, you know.
Play
Note:
New Year's Greeting

Out wiiith the oni!
Play
Note:
Setsubun (After Casting Beans)

I think we should lure the enemy and bring them down, though.
Play
Note:
Regiment Battle Team Change

Lure and then bring them down!
Play
Note:
Touken Ranbu's Third Year Anniversary (2018)

You've done a good job this past year. For someone like me who can't stay in one place, it's nothing short of impressive.
Play
Note:
Saniwa Second Year Anniversary

This is the third year since your inauguration, eh? I see, congratulations!
Play
Note:
Saniwa Fourth Year Anniversary

Oops, it's your fourth inauguration anniversary, isn't it? No no, it's not that I forgot, you know?
Play
Note:
Saniwa Fifth Year Anniversary
Play
Note:

Retrieved from "https://touken-ranbu.fandom.com/wiki/Koryuu_Kagemitsu?oldid=154564"
Community content is available under CC-BY-SA unless otherwise noted.