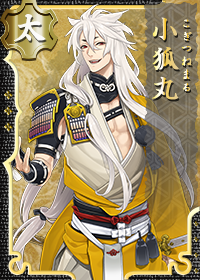 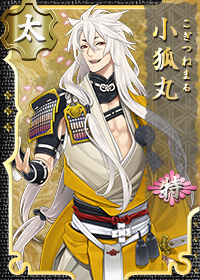 Because my forging was assisted by a fox, I was named Kogitsunemaru. As an offering of gratitude to the Gods, I was bestowed with the names of both Kokaji and the little fox that assisted him. My body isn't small in the least.
Play
Note:
Kokaji (小鍛冶/Little blacksmith) is the title of a noh song about Sanjou Munechika receiving assistance from Inari, the Shinto god of fertility, who appeared to him as a fox. With Inari's help, he forged a sword to present to the emperor and named the sword Kogitsunemaru (kogitsune = little fox). Kokaji was also Sanjou's alias. According to the above story, Kogitsunemaru had "Kokaji Munechika" carved on the front and "Kogitsunemaru" on the back.
Obtained

Although I might be big, my name is Kogitsunemaru. No, I'm not joking. I'm certainly not a fake, either. I'm small! Even though I'm big!
Play
Note:
Kogitsunemaru's name contains the kanji for small (小), as well as the kanji for fox (狐). In his first line, he says "I'm big, but my name is "small fox."
Opening ❀
Login (Loading)

Do you want me to... princess carry you?
Play
Note:

Are you taking a break, Master?
Play
Note:
Citadel (Injured)

He must have gone to the mountains to train with the foxes.
Play
Note:
Formation (Member)

Since I'm a small fox, I guess that makes me a junior captain...
Play
Note:
See notes on his introduction dialogue.
Fatigue Recovery (One Bite Dango)

With this, I'm sure I can be more active now.
Play
Note:

It seems my fur is shinier than before.
Play
Note:

I will be back.
Play
Note:
Expedition (Complete - Leader of Expedition Party)

I have returned from my expedition.
Play
Note:
Expedition (Complete - Leader of Primary Party)

By all means, please--take this.
Play
Note:
Repairs (Minor Injury)

When you melt us down, we're all just metal.
Play
Note:
Mission (Complete)

Money makes the world go round.
Play
Note:
This is a saying. Literal translation is "Money is something that goes around the whole world."
Front Lines & Battles❀
Front Lines

Well now... would you like to dance?
Play
Note:
PvP

It'll hurt if you get bitten... because I'm wild!
Play
Note:
Minor Injury

My fur's sheen is all messed up now...
Play
Note:
Awakening

A duel is rather old fashioned... not that I hate it!
Play
Note:
Boss Node

The small fox, even larger than before, has returned.
Play
Note:
Destroyed

Well, death will befall us all one day... Please, do not let it bother you...
Play
Note:
Internal Affairs❀
Please go here for special Internal Affairs interactions
Horsekeeping

Just because they're horses, they think they can look down on... Actually, let's give them something to look down on.
Play
Note:
Horsekeeping (Complete)

Horses nowadays have figured out how to ignore people, I see.
Play
Note:
Fieldwork

Are we raising crops for beans to make fried tofu?
Play
Note:
Fried tofu (油揚げ) is said to be a fox's favorite food.
Fieldwork (Complete)

Are you that fond of my fur?
Play
Note:
Citadel (Injured - Poke multiple times)

Since it's said that it can heal injuries... may I request some grooming?
Play
Note:
Smithing (Complete)

The smithing has been done.
Play
Note:
Repair (Complete)

Some news have been received.
Play
Note:
Background Change

O horse, can you listen to what I say?
Play
Note:
Omamori Equipped

Although I might be big, my name is Kogitsunemaru... supposedly. I've certainly become small now!
Play
Note:

If I've become like this, then I can eat a big piece of fried tofu.
Play
Note:

It's alright to pet me, you know? Here.
Play
Note:
Welcome Back Greeting (After Long Absence)

So this is where the Oni were.
Play
Note:
Setsubun (Cast Beans)

Out wiiith the Oniii!
Play
Note:
Setsubun (After Casting Beans)

Soy beaaaans!
Play
Note:
Kogitsunemaru here says a phrase which could be roughly translated to "the base/origin of fried tofu" and fried tofu (油揚げ) is made from soy beans, so essentially he may be talking about the beans. He may also mean tofu before it is fried.
Spring Garden Flower Viewing

Ooh. Is it our first anniversary? If I had known then I would have fixed my fur a little.
Play
Note:
Touken Ranbu's Second Year Anniversary (2017)

It is now our second anniversary. The battle is still ongoing; however at anytime you wish to be soothed, please fluff up my fur.
Play
Note:
Touken Ranbu's Third Year Anniversary (2018)

It is now our third anniversary. The battle is still ongoing, isn't it.
Play
Note:
Touken Ranbu's Fourth Year Anniversary (2019)

Our fourth anniversary...... I see. Dear me, time flies so fast. Even my fur is this fluffy.
Play
Note:
Play
Play
Touken Ranbu's Fifth Year Anniversary (2020)

Master, do you know what day it is today? It's the first anniversary of your inauguration.
Play
Note:
Saniwa Second Year Anniversary

Master, this day has come again this year. That's right, it's the fourth anniversary of your inauguration!
Play
Note:
Saniwa Fifth Year Anniversary

Retrieved from "https://touken-ranbu.fandom.com/wiki/Kogitsunemaru?oldid=154341"
Community content is available under CC-BY-SA unless otherwise noted.