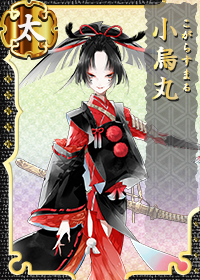 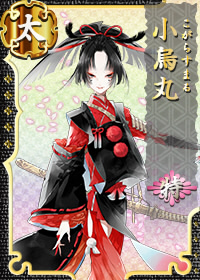 'Small' may be in my name, but it is out of modesty. In the old days, 'small' was purposefully used to mean such things as 'upper' or 'large'. This Kogarasumaru is the midpoint between transition of the straight sword to the katana... something like the father of the katana.
Play
Note:
Kogarasu literally means 'small crow'.
Obtained

My name is Kogarasumaru. To battle foreign foes is my destiny. Even after a thousand years, that will not change.
Play
Note:
Opening ❀
Login (Loading)

Tourabu, was it not?
Play
Note:
Login (Complete)

To think you would bring this father here... Is this fate as well?
Play
Note:

You must not judge others on appearance alone.
Play
Note:

I am a blade from the age when the current form of Japanese swords was born. As such, I am essentially the father of the other swords here.
Play
Note:
Citadel (Idle)

Oh my, have you set me aside and fallen asleep?
Play
Note:
Citadel (Injured)

All swords travel. As offerings of goodwill, as objects sold away, as stolen goods, or broken in battle. Fate has different forms.
Play
Note:
Formation (Member)

Watching over the next generation is a father's duty.
Play
Note:
Formation (Captain)

Now, how shall I wear this? It must bring out my tastes.
Play
Note:

Equipment...doesn't have only one use.
Play
Note:
Expedition

Well then, I'll be off.
Play
Note:
Expedition (Complete - Leader of Expedition Party)

I've returned. Were you in good health even in father's absence?
Play
Note:
Expedition (Complete - Leader of Primary Party)

A new sword has arrived, has he? Now now, father shall take a look.
Play
Note:
Troops Create

I shall be taking a short break. Forgive this old blade.
Play
Note:
Repairs (Medium/Severe Injury)

Leave it... to the children for a while. ...I am going to recuperate.
Play
Note:
Refinery

Oh? A mission has been completed.
Play
Note:
Battle Record

Let me see, master. Show your achievements to this father.
Play
Note:
Merchant

Is this not a drinking establishment? No no, it's been over a thousand years since I've come of age.
Play
Note:
Front Lines & Battles❀
Front Lines

Now then, off to battle.
Play
Note:
Resource Discovery

Oh... this is a godsend.
Play
Note:
Scouting

Well then, shall we carry out the original duty of the sword?
Play
Note:
PvP

There there, shall we train?
Play
Note:
Attacking

This body aches... to bring down the foreign foe.
Play
Note:
Duel

Are you...entrusting this thread of hope upon this father?
Play
Note:
Boss Node

The head of the general has been the highest honor since the old days.
Play
Note:
Victory (MVP)

The older the crow, the wiser.
Play
Note:
A play on the idiom 亀の甲より年の功, meaning 'the older, the wiser'.
Rank-Up Toku

It would be no good to lose to the children. Hence, this father's grown strong, too.
Play
Note:
Destroyed

Come to think of it, horses were the reason why katana became gently curved.
Play
Note:
The curve of the katana was developed for better slashing movements on horseback.
Horsekeeping (Complete)

Without horses, we would never have gained existence.
Play
Note:
Fieldwork

Surely you can't be considering idleness in front of your father.
Play
Note:
Fieldwork (Complete)

Ah, to think this father would be asked to train at this age.
Play
Note:
Sparring (Complete)

How was that? Did you acquire anything from this father?
Play
Note:
Ranbu Level❀
Citadel (Poke multiple times)

...Keep it in moderation. You are dealing with an injured one.
Play
Note:
Smithing (Complete)

The repair room has opened up. Who is next?
Play
Note:
Specific event banner introduction

Even father may fail at times.
Play
Note:

I put too much tension into it.
Play
Note:
Horse Equipped

Hoho, you really like to worry.
Play
Note:
Special Lines❀
Welcome Back Greeting (After Long Absence)

Oh, Master. So you've returned. Without their master, the children have been kicking up quite the fuss.
Play
Note:
New Year's Greeting

Happy New Year. There are many children here. Preparing the otoshidama will prove to be difficult.
Play
Note:
Omikuji

Demons, eh? It has been a while.
Play
Note:
Setsubun (Boss Node)

There you go.
Play
Note:
Setsubun (After Casting Beans)

I see, we have reached our fourth anniversary. For the peace of my children, father must knuckle down.
Play
Note:
Play
Play
Touken Ranbu's Fifth Year Anniversary (2020)

Our fifth anniversary. To think that we have accumulated this many. Very well. It is this father's great pleasure to continue walking forward with his children.
Play
Note:
Saniwa First Year Anniversary

Ooh. You have welcomed your third year, I see. That is a wonderful thing.
Play
Note:
Saniwa Fourth Year Anniversary

My, so it's your fifth anniversary. My gracious, the children of man certainly do grow fast.
Play
Note:

Retrieved from "https://touken-ranbu.fandom.com/wiki/Kogarasumaru?oldid=171951"
Community content is available under CC-BY-SA unless otherwise noted.