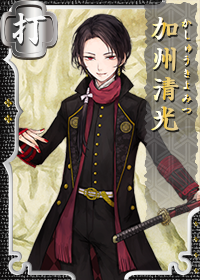 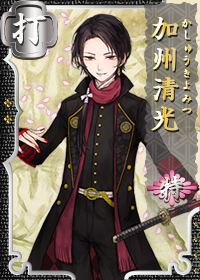 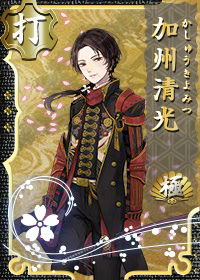 I am Kashuu Kiyomitsu. The child beneath the river, the child of the river banks, I suppose.
I may be hard to handle but my ability is top notch. I am always looking for people who can use me well, shower me with affection, and dress me beautifully.
Play
Note:
Kashuu Kiyomitsu's swordsmith lived in the slums of the hinin(非人) by the river bank, who were part of the untouchable burakumin, an outcast group at the bottom of the Edo social order due to their "unclean” professions such as butchers, tanners and entertainers. The hinin were not allowed to work on rice fields so they lived by the river bank that was unsuitable for agriculture, thus they were also called people of the river bank(河原者).
Obtained

Uhh. I'm the child beneath the river. Kashuu Kiyomitsu. I may be difficult to handle, but my performance is good.
Play
Note:
Opening ❀
Login (Loading)

I'm the child beneath the river, after all. I can be unexpectedly well-informed about -those- kinds of things too, you know.
Play
Note:
See book description note.

I'm preeeetty difficult to handle. Sooooo, you have to take good care of me, okay?
Play
Note:

What? Is petting me fun?
Play
Note:
Citadel (Idle)

I told you I'm in the middle of my treatment!
Play
Note:
Citadel (Kiwame Sendoff)

Um...You see, there's something I'd like to ask...
Play
Note:
Formation (Member)

Looks like the expedition party's back.
Play
Note:
Smithing

If you're bothered to repair me, does that mean you still love me?
Play
Note:
See trivia section.
Refinery

The combination is a success!
Play
Note:
Mission (Complete)

So? Your current performance is-
Play
Note:
Merchant

Alright, it's time for a sortie!
Play
Note:
Resource Discovery

Scouting isn't really my thing...
Play
Note:
Consider that he has the highest scouting stats among uchigatana, along with Nakigitsune.
Sortie Kick-off

We're here to search the premises!
Play
Note:
Reference to the famous line Shinsengumi Captain Kondo Isami allegedly shouted at the start of the Ikedaya Raid. Modern equivalent would be "Police! Open up!"
PvP

Make it look like a feint... and then attack!
Play
Note:
Double Attack Callout

Anyone who sees me naked... shall die...!
Play
Note:
Duel

So you're the boss.
Play
Note:
Victory (MVP)

Heheh. I think I became a little bit cuter. From now on, please keep taking care of me.
Play
Note:
Destroyed

I don't like jobs that make me dirty...
Play
Note:
Fieldwork (Complete)

I finished the errand~ I'm so tired~
Play
Note:
Sparring

Don't look at me. I'm all torn up.
Play
Note:
Smithing (Complete)

I hate it when this happens.
Play
Note:

Huh? Did I overdo it?
Play
Note:

Hmm, so it won't work if I decorate it?
Play
Note:
Horse Equipped

My nails, won't you paint them?
Play
Note:

Ya~wn. I'm so sleepy. Because I'm small, I won't get caught even if I slack off, right?
Play
Note:
Welcome Back Greeting (After Long Absence)

Medium luck. It's not so bad.
Play
Note:

Mr. Oni~ Where are you~
Play
Note:
Setsubun (Cast Beans)

Make it look like a feint - out with the Oni!
Play
Note:
Setsubun (After Casting Beans)

Congratulations, one year. From now on too, Kashuu Kiyomitsu will do his be~st.
Play
Note:
Touken Ranbu's Second Year Anniversary (2017)

Congratulations, two years. If you've come this far, I guess that means... It's love after all?
Play
Note:
Touken Ranbu's Third Year Anniversary (2018)

Uh, ahem. It's been three years. Even from here on, us who are loved a lot, we will work hard.
Play
Note:
Touken Ranbu's Fourth Year Anniversary (2019)

Hey, after being a saniwa for one year you must know, right? Who's number one, I mean!
Play
Note:
Saniwa Second Year Anniversary

Congratulations on your third anniversary. Since you're really using someone like me, I guess... It's love, right?
Play
Note:
Saniwa Fourth Year Anniversary

Hey, now that you've been a saniwa for four years, you're totally in the habit of using a hard to handle sword like me, right?
Play
Note:
Saniwa Fifth Year Anniversary
Play
Note:
Introduction ⚛
Event
Translation
Audio
Book Description

I went on a journey to earn my master's love. Other people might consider me to be hard to use, but as long as my master doesn't think that, that's all that matters.
Play
Note:
Obtained

Uum, well, I left on a journey in order to be loved forever. Couldn't I?
Play
Note:
Citadel ⚛
Citadel

If you're going to do that, then I'll do this!
Play
Note:

Hehe, am I being loved?
Play
Note:

What?... It smells like sweat, huh?
Play
Note:
Citadel (Idle)

Shoot... My top and bottom eyelids are in love with each other...
Play
Note:
Citadel (Injured)

Oh no, it looks like they hate you now... But don't worry, I'll be sure to love you.
Play
Note:
Formation (Member)

Look, the expedition team is back.
Play
Note:
Smithing

Looks like a new sword has been born. But make sure you don't forget about me, okay?
Play
Note:
Troops Create

Looks like a mission is done. Should we send someone to accept the rewards?
Play
Note:
Battle Record

Your current achievements is something like this, I guess?
Play
Note:
Merchant

I... remember I was sold in a night shop in the past... Oh, no, never mind.
Play
Note:
Front Lines & Battles⚛
Front Lines

Should we take it to the lost-and-found... Yeah, of course not.
Play
Note:
Scouting

I won't be done with just one shot, got it?
Play
Note:
Attacking

I'm getting serious from now on!
Play
Note:
Minor Injury

A one on one?
Play
Note:
Boss Node

Once we defeat the boss we're done. Hehe, let's hurry up and go back home!
Play
Note:
Victory (MVP)

I heard horse meat is pretty tasty... I'm not trying to make a lame pun!
Play
Note:
The word for horse, "uma", is part of the word for tasty, "umai", which makes it a pun.
Horsekeeping (Complete)

I finished the errand~ I'm so tired~
Play
Note:
Sparring

Uh- I'm happy that you're worried about me, but I don't want you to see me like this, you know?
Play
Note:
Smithing (Complete)

Looks like it's done. Should we go get them?
Play
Note:
Repair (Complete)

Looks like the repairs are done. Who's next?
Play
Note:
Specific event banner introduction

Are you planning to bring me along too?
Play
Note:
Background Change

I hate it when this happens.
Play
Note:

Huh? Did I overdo it?
Play
Note:

Hmm, so it won't work if I decorate it?
Play
Note:
Horse Equipped

Hehe, I can feel your love.
Play
Note:
Special Lines⚛
Welcome Back Greeting (After Long Absence)

What a relief... I thought something happened, and that maybe you weren't coming back anymore... Stupid, I'm not crying.
Play
Note:
New Year's Greeting

Hmm, shall we be on our way to visit a shrine for the first time this year? Alright, I'll go get prepared.
Play
Note:
Omikuji

Medium luck. It's not so bad.
Play
Note:

So the Oni is here.
Play
Note:
Setsubun (Cast Beans)

Out with the Oni Attack!
Play
Note:
Setsubun (After Casting Beans)

Ahaha, I think I did my very best with that one.
Play
Note:
Spring Garden Flower Viewing

The flowers, they sure are pretty. (Sigh) I wonder if I should dress up too...
Play
Note:
Regiment Battle Team Change

Happy fourth anniversary. I really am the face of these anniversaries, huh?
Play
Note:

Congratulations on your third anniversary. If you're properly handling someone like me, it must be love, right?
Play
Note:
Saniwa Fourth Year Anniversary

Yaho, are you well? I'm doing well~
Even though I did say I would be on a journey to train, the places I can go are limited anyway.
In the end, I decided to drop in on Shinsengumi, the place where my old master was at.
Well, perhaps I can become stronger if I kept a close eye on the movements of a person who could use me correctly.
I'll write another letter soon~

Yaho, you must be starting to feel lonely without me by now.
Training is... well, I'm doing fine. Of course.
It is kinda strange though, for the old me to be so close beside me.
I keep thinking, "He's gonna get chipped soon..." even though it is still me, it feels like someone else.
What is this, I wonder.

Yaho~
I was thinking that you might be worried because of what I wrote in my previous letter.
It seems that I have been acting unlike myself, thinking about this and that.
It's what I can do now that is important.
History will not change, it cannot be changed.
But, I can change so that you will love me even more than you do now.

Wait for me.
For I shall soon be your number One.

Retrieved from "https://touken-ranbu.fandom.com/wiki/Kashuu_Kiyomitsu?oldid=154363"
Community content is available under CC-BY-SA unless otherwise noted.