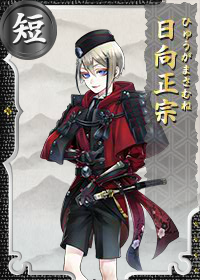 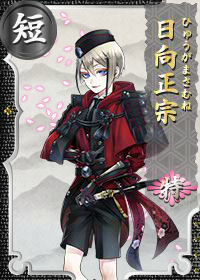 I am Hyuuga Masamune. I am also known as Katata Masamune or Oogaki Masamune. Among my former masters, I suppose one of the more famous ones is Ishida Mitsunari. Even though I was originally a sword used for prayer... Yes, I hope to perform well this time, too.
Play
Note:
Obtained

I drifted and turned up here. I am Hyuuga Masamune.
Play
Note:
Opening ❀
Login (Loading)

What we're trying to do is to help people, right? ...I think that's a good thing.
Play
Note:

I think I can make my umeboshi even tastier. Next time, I'll try it.
Play
Note:
The word "umeboshi" is often translated into English as "Japanese salt plums", "salt plums" or "pickled plums". Ume (Prunus mume) is a species of fruit-bearing tree in the genus Prunus, which is often called a plum but is actually more closely related to the apricot.
Citadel (Idle)

Well, I guess I have some free time... I wonder if I should help other people.
Play
Note:
Citadel (Injured)

You don't need to worry so much... Next time will be better.
Play
Note:
Citadel (Kiwame Sendoff)

I wish there was something I could have done to help him, but apparently it wouldn't really be a training journey that way.
Play
Note:
Formation (Member)

I understand, I will support the captain with all I've got!
Play
Note:
Formation (Captain)

What do you think?
Play
Note:

Does it suit me?
Play
Note:
Expedition

I can help people on an expedition! Let me handle this.
Play
Note:
Expedition (Complete - Leader of Expedition Party)

Oh, I wonder if the expedition party has returned.
Play
Note:
Smithing

Well, I will go on repair for a little while.
Play
Note:
Repairs (Medium/Severe Injury)

Record of military achievements? I understand, leave the clerical work to me.
Play
Note:
Merchant

Are you going shopping? I understand, leave the calculations to me.
Play
Note:
His previous owner Ishida Mitsunari was particularly skilled in mathematics.
Front Lines & Battles❀
Front Lines

Can you tell me the report of the situation?
Play
Note:
Sortie Kick-off

Even if it's only a practice, I'm not pulling any punches!
Play
Note:
Attacking

If I have to jump in my enemy's bag, I'll do it!
Play
Note:
Hyuuga makes mention to a japanese saying, "If you know your enemy, jump onto his bag", which is equivalent to "keep your friends close and your enemies closer".
Minor Injury

The true power of Masamune, I will show it to you!
Play
Note:
Duel

After this is the stronghold. ...Let's do our best.
Play
Note:
Victory (MVP)

I thought I could hold on for a bit more... It is regrettable... Next time... Ah right... There will be no next time, huh...
Play
Note:
Internal Affairs❀
Please go here for special Internal Affairs interactions
Horsekeeping

Look, both the horse and I are gifts.
Play
Note:
Fieldwork

Maybe I should make a plan for field expansion.
Play
Note:
Fieldwork (Complete)

I almost had it. But I'll redeem myself next time.
Play
Note:
Ranbu Level❀
Citadel (Poke multiple times)

Oww. Oh no, you don't have to be alarmed... I'm fine.
Play
Note:
Smithing (Complete)

It's about time for the smithing to finish.
Play
Note:
Repair (Complete)

So this is the remodeling plan.
Play
Note:
Troops Create (Failed)

That was so close.
Play
Note:

Oh, you're back. Well, it's all right. Let's do it nicely!
Play
Note:
New Year's Greeting

Oh? Should I help with the omikuji?
Play
Note:

Even if the opponent is a Oni, let's do our best.
Play
Note:
Setsubun (Cast Beans)

Out with the Oni! In with the luck!
Play
Note:

The amount of beans to be used should be based on the plan...
Play
Note:
Spring Garden Flower Viewing
Play
Note:
Regiment Battle Team Change

What do you think? Can you do this?
Play
Note:
Touken Ranbu's Third Year Anniversary (2018)

Three years... I see. So much time has passed before I came.
Play
Note:
Touken Ranbu's Fourth Year Anniversary (2019)

It seems that it's our fourth anniversary. The battle still continues, but I'm sure we'll do well!
Play
Note:
Play
Play
Touken Ranbu's Fifth Year Anniversary (2020)

I see... It's our fifth anniversary. Master, thank you for everything!
Play
Note:
Saniwa First Year Anniversary

Master, congratulations on your one year inauguration anniversary. Let's do well from here on.
Play
Note:
Saniwa Second Year Anniversary

Master, congratulations on your three year inauguration anniversary. Have you thought about your next goal?
Play
Note:
Saniwa Fourth Year Anniversary

Master, it's finally your fifth year inauguration anniversary! Right now it feels like we'll do well at everything we try!
Play
Note:

Retrieved from "https://touken-ranbu.fandom.com/wiki/Hyuuga_Masamune?oldid=179127"
Community content is available under CC-BY-SA unless otherwise noted.