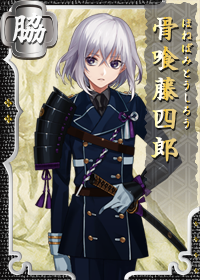 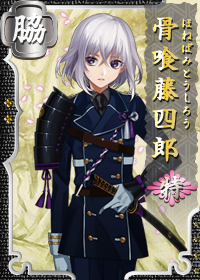 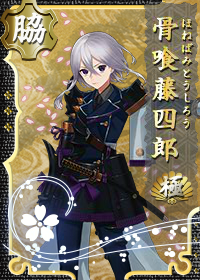 My name is Honebami Toushirou. I was originally a naginata; however, now, I am a naga-wakizashi. I have no memories.The only thing I can remember are flames. It seems that those flames burned away everything about me.
Play
Note:
Obtained

I'm Honebami Toushirou. You'll have to excuse me. My memories are few and far between.
Play
Note:
Opening ❀
Login (Loading)

My memories… are gone. I've always thought it was fine that way.
Play
Note:
Login (Complete)

Even without memories… even without yesterday… I'll manage one way or another.
Play
Note:
Citadel ❀
Citadel

If you're concerned about my injuries, then repair me.
Play
Note:
Line removed as of Feb. 18, 2015

...I have something to say. Listen to me.
Play
Note:
Formation (Member)

Thanks for the meal.
Play
Note:
Fatigue Recovery (Oiwaijuu Bento)

Becoming stronger with this... and then what?
Play
Note:
Expedition

I'm off to get polished.
Play
Note:
Repairs (Medium/Severe Injury)

It feels like I've been polished... for a long time...
Play
Note:
Refinery

It'd be better if I can gain not only strength, but also my memories.
Play
Note:
Mission (Complete)

I have no affinity with stores.
Play
Note:
Front Lines & Battles❀
Front Lines

And this is... my death blow!
Play
Note:
Minor Injury

I've recalled a bit of the past… You will die here.
Play
Note:
Duel

From here on, cut into the opponent's headquarters.
Play
Note:
Victory (MVP)

I know of a man who smells like the fields.
Play
Note:
Fieldwork (Complete)

... It was Hideyoshi. How could I have forgotten even that.
Play
Note:
Sparring

Even if you poke me like that my memory won't return, you know?
Play
Note:
Citadel (Injured - Poke multiple times)

...I want to rest a little.
Play
Note:
Smithing (Complete)

... So you've come back. There's no issue, then.
Play
Note:
New Year's Greeting

Are you going to draw a fortune slip?
Play
Note:

With this... Have I added one year's worth of memories?
Play
Note:
Touken Ranbu's Second Year Anniversary (2017)

Two years' worth of memories. There might be fewer years than those of my lost past, but...
Play
Note:
Touken Ranbu's Third Year Anniversary (2018)

I've gained a third year of memories. If they keep increasing like this...
Play
Note:
Touken Ranbu's Fourth Year Anniversary (2019)

I've reached my fifth year of new memories. I wonder how much more they will increase...
Play
Note:
Saniwa First Year Anniversary

... The second anniversary of your inauguration. As expected of you.
Play
Note:
Saniwa Third Year Anniversary

Stop that. I'll end up wanting to cling onto you.
Play
Note:

Your kindness... hurts. Because it hurts, sometimes memories of the past seem to come up.
Play
Note:

Even though my memories have returned, I...
Play
Note:
Citadel (Idle)

Hideyoshi also... No, it's nothing.
Play
Note:
Citadel (Kiwame Sendoff)

Leave it to me.
Play
Note:
Formation (Captain)

Should I put this on?
Play
Note:

Are you satisfied with this?
Play
Note:
Expedition

I'm going out for a little while.
Play
Note:
Expedition (Complete - Leader of Expedition Party)

I have been reforged.
Play
Note:
Repairs (Medium/Severe Injury)

Only my power is increasing, I wonder where my memories are.
Play
Note:
Mission (Complete)

The mission has been completed.
Play
Note:
Battle Record

Shops are nice... I can be at ease.
Play
Note:
Front Lines & Battles⚛
Front Lines

To the frontlines, is it? Understood.
Play
Note:
Resource Discovery

Picked up something.
Play
Note:
Scouting

Don't just charge in. Lie in wait at your most advantageous distance.
Play
Note:
PvP

This is my slash.
Play
Note:

This is my thrust.
Play
Note:
Double Attack Callout

And this is... my death blow! Take this!
Play
Note:
Minor Injury

This still... doesn't compare to when I burned in the flames.
Play
Note:
Awakening

From here on, cut into the opponent's headquarters.
Play
Note:
Victory (MVP)

Horses are delighted when stroked. Just like me.
Play
Note:
Horsekeeping (Complete)

Do you want to be patted, too?
Play
Note:
Fieldwork

There was a brother who was shortened to suit the height of a man named Hideyoshi.
Play
Note:
Fieldwork (Complete)

The fields remember memories of the past.
Play
Note:
Sparring

Instead of talking about the past, I think the present is more important.
Play
Note:
Citadel (Injured - Poke multiple times)

...There's no need to worry that much.
Play
Note:
Smithing (Complete)

It looks like an event.
Play
Note:
Background Change

What kind of citadel will it be?
Play
Note:
Troops Create (Failed)

An omamori? ...thanks.
Play
Note:
Special Lines⚛
Welcome Back Greeting (After Long Absence)

... So you've come back. Next time, please don't be away for so long.
Play
Note:
New Year's Greeting

Out with the Oni. In with the fortune.
Play
Note:

Fifth anniversary. A lot happened. I'm sure it will continue to. All of them are precious memories to me.
Play
Note:
Saniwa First Year Anniversary

It's been a year since you took office, is it? Keep leading us from now on.
Play
Note:
Saniwa Second Year Anniversary

It's been two years since you took office, is it? Keep taking care of us as always.
Play
Note:
Saniwa Third Year Anniversary

It's been three years since you took office. Alright, shall we celebrate?
Play
Note:
Saniwa Fourth Year Anniversary

Dear Master,
I am on a journey to find the past that I have lost.
The past is the past. I know that much.
However, a vague past means an uncertain present.
By perusing documents and going back in time - I will regain those scenes as parts of my memory.
Right now, that is what I need.

Dear Master,
The journey following my past is long.
I went to the Ootomo. And then to the Ashikaga. Then back to Ootomo in the middle of the war.
...... And then, under Hideyoshi.
My heart aches. My successive masters had changed, but I was always watching.
Is it because I was made into a wakizashi, from a naginata, here?
Or, is it that, like other swords, I was swallowed by flames here...or something...?

Dear Master,
The previous letter was wrong.
Osaka is not where I burned.
Osaka Castle was burned down, yet I was safe.
So it seemed like I was left behind, and I grew sad. Then I forgot everything when I was burned.
But, now it's different.
As long as you are there, Master, my brothers and friends are also there.
Seeing that, there is no need for me to fuss over the past any longer.
Soon enough, I will return home.

Retrieved from "https://touken-ranbu.fandom.com/wiki/Honebami_Toushirou?oldid=154373"
Community content is available under CC-BY-SA unless otherwise noted.