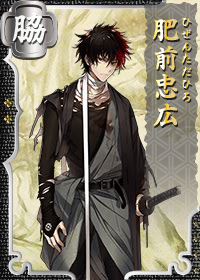 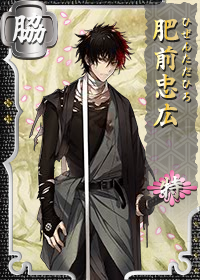 I am Hizen Tadahiro. I am a first-rate and well-known sword, but because of my former master, I've been branded a killer's sword. He kept using me even when I broke, but who knows if he was the type to hang on to stuff or was just frugal...
Play
Note:
Obtained

Hey, stop staring at me. ...Hizen Tadahiro. I'm a killer's sword. So. who do I have to kill?
Play
Note:
This line is spoken when he is obtained as a reward from Special Investigation Bunkyuu Tosa-han.

...Hizen Tadahiro. I'm a killer's sword. So. who do I have to kill?
Play
Note:
This line is spoken when he is obtained as a battle drop from Special Investigation Bunkyuu Tosa-han.
Opening ❀
Login (Loading)

Who do I have to kill?
Play
Note:
Citadel ❀
Citadel

All I need to do is kill the enemies, right?
Play
Note:
Formation (Captain)

Will this be useful?
Play
Note:

Tch... you're making me put on some really annoying stuff.
Play
Note:

You're telling me to use this?
Play
Note:
Expedition

It's noisy at the entrance. Go shut them up.
Play
Note:
Smithing

Hmm... so this is how many you've cut down so far.
Play
Note:
Merchant

It's not like we're breaking into the store, so...
Play
Note:
Front Lines & Battles❀
Front Lines

Well... let's get to the killing.
Play
Note:
Resource Discovery

Where should we go? Let me know, quick.
Play
Note:
Sortie Kick-off

Don't mess with me.
Play
Note:

I win if I slay the enemy before me. Easy and simple!
Play
Note:
Boss Node

So I'm the one with the most kills.
Play
Note:
Rank-Up Toku

Hahaha. I'll be able to kill even more with this, eh?
Play
Note:
Destroyed

What did I tell you? The horses are scared...
Play
Note:
Fieldwork

Field work? Are you messing with me?
Play
Note:
Fieldwork (Complete)

Eating's more up my alley, you know?
Play
Note:
Sparring

Up against me, you might even break, you know?
Play
Note:
Sparring (Complete)

Huh... Is this a notice?
Play
Note:
Background Change

What the heck!
Play
Note:

Don't make me do this!
Play
Note:

Got a problem with that? Huh!?
Play
Note:
Horse Equipped

Oh? So you're not just gonna use me once then get rid of me, huh?
Play
Note:
Special Lines❀
Welcome Back Greeting (After Long Absence)

Huh? Been a while. Did you find someone you want to me to kill?
Play
Note:
New Year's Greeting

Hey. Looks like it's a new year. ...What? What more do you want?
Play
Note:
Omikuji

Huh? You want me to pull it?
Play
Note:

Which one of you demons wants to die by my blade?
Play
Note:
Setsubun (Boss Node)

Out with the demons, in with luck.
Play
Note:

Out with the demons... Does this even do anything?
Play
Note:
Setsubun (After Casting Beans)

Oi, oi, what are you doing dragging the bloody sword of a killer out for an important anniversary like this?
Play
Note:
Saniwa First Year Anniversary

So it's your second inauguration anniversary. No wonder you're walking around as if you own the place.
Play
Note:
Saniwa Third Year Anniversary

Third inauguration anniversary, huh... Is this it? Is killing enemies fun to you?
Play
Note:
Saniwa Fourth Year Anniversary

Fifth inauguration anniversary. Means you must have worked pretty hard. ...What? Then what was I supposed to say!?
Play
Note:

Retrieved from "https://touken-ranbu.fandom.com/wiki/Hizen_Tadahiro?oldid=171948"
Community content is available under CC-BY-SA unless otherwise noted.