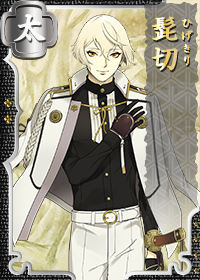 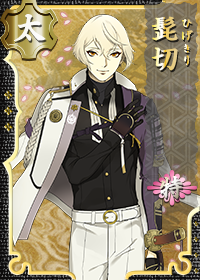 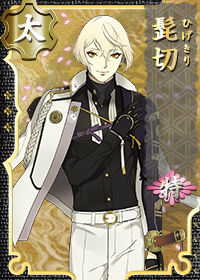 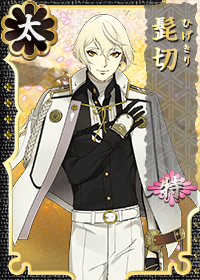 I'm a treasure of the Minamoto clan, Higekiri. While being tested on a criminal's neck, I cut off even his beard in a single blow, so I ended up with this name.
Be that as it may, names are relatively meaningless to me.
Play
Note:
Obtained

I'm a treasure of the Minamoto clan, Higekiri. Are you fine with being my master in the present age?
Play
Note:
Opening ❀
Login (Loading)

My younger brother's... Hmmm, what was it again. Uh... Well, I've completely forgotten his name, but anyway, please take care of him.
Play
Note:

After a thousand years of being a sword... Most things don't really matter very much anymore.
Play
Note:

It's not good to be jealous of others. You'll become a demon... Let's be more big-hearted and take things easy.
Play
Note:
Possibly a reference to the tale of Uji no Hashihime. According to legend, Hashihime was a noblewoman who became consumed by jealousy and eventually turned into a demon who terrorized Kyoto. The famous warrior Watanabe no Tsuna used Higekiri to sever her arm.
Citadel (Idle)

I wonder if a sword's name is something that contains the emotions of its owner?
Play
Note:
Citadel (Injured)

Well, I sure messed up in that battle just now. Hahaha.
Play
Note:
Citadel (Kiwame Sendoff)

Oh my, will his name change after becoming stronger?
Play
Note:
This alludes to how Higekiri was progressively renamed throughout its history as it accomplished various feats.
Formation (Member)

No, no, I'm not going to cut down my allies just because I'm not the captain.
Play
Note:
This may be a reference to one of Higekiri's other names, Tomokiri (Friend-Cutter).
Formation (Captain)

I'm the one in charge, eh... Sure brings back memories.
Play
Note:
Fatigue Recovery (One Bite Dango)

It's okay, it's okay, of course I won't be careless with the equipment.
Play
Note:

Shall I use this?
Play
Note:

If I neglect my equipment, I won't be able to fight.
Play
Note:
Expedition

An expedition... Well, flashy battles aren't the only work to be done.
Play
Note:
Expedition (Complete - Leader of Expedition Party)

I'm back. It turned out like this.
Play
Note:
Expedition (Complete - Leader of Primary Party)

Just as I was thinking that it was getting lively at the front door, it looks like they've returned.
Play
Note:
Smithing

Oh, I didn't notice we had a new friend.
Play
Note:
Troops Create

I ended up making something like this.
Play
Note:
Repairs (Minor Injury)

Just for a while, I'll be taking a somewhat longer break.
Play
Note:
Refinery

What are you going to buy? Or are you just here to window-shop?
Play
Note:
Front Lines & Battles❀
Front Lines

My, my? Something's fallen on the ground.
Play
Note:
Scouting

Report to me the scouting results. Let's think of a plan.
Play
Note:
Sortie Kick-off

Well, well, I am the treasure of the Minamoto clan, Higekiri!
Play
Note:
PvP

Whether the winner or loser, we both gain. It's a good thing, isn't it.
Play
Note:
Attacking

That arm, I'll take it!
Play
Note:
This may be a reference to one of the legends surrounding Higekiri, where he cut off a demon's arm.
Critical Hit

Whether you're a demon or a sword, I'll cut you, you know?
Play
Note:
This may refer to one of Higekiri's other names, Onikiri (Demon-Cutter).
Minor Injury

It's nothing serious.
Play
Note:

Having driven me to this point... I can't just say it doesn't matter!
Play
Note:
Duel

Ohh... Scary, is this how Genji Tsuna felt then?
Play
Note:
Genji Tsuna, also known as Watanabe no Tsuna, was a famous retainer of the Minamoto clan and a former owner of Higekiri. According to legend, he once used Higekiri to sever the arm of a notorious demon named Ibaraki-doji.
Boss Node

Well then... It's time to exterminate the demons.
Play
Note:
Once again, another reference to his other name, Onikiri (Demon-Cutter).
Victory (MVP)

Eh? Is it okay if I'm the best?
Play
Note:
Rank-Up Toku

Even if the enemies are demons, I will easily cut them all!
Play
Note:
This is another reference to his other name, Onikiri (Demon-Cutter).
Rank-Up Toku Ni

... hmm, did I ever really roar at night?
Play
Note:
Higekiri, then named 'Onikiri,' was passed on to Minamoto no Tameyoshi, who claimed that Higekiri's blade would roar like a lion at night. He then renamed the blade 'Shishi-no-ko,' lit. 'lion cub.'
Rank-Up Toku San

Mm. Like this, I feel like I can't lose to any other sword.
Play
Note:
This may be a reference to how Higekiri, then named 'Tomokiri' for cutting off a portion of his own replica, was renamed back to Higekiri by Minamoto no Yoshitomo after he saw a dream in which a deity told him that renaming swords too many times weakened their powers.
Destroyed

It's no longer... the Minamoto clan's era huh... For me to end up like this... is only natural...
Play
Note:
Internal Affairs❀
Please go here for special Internal Affairs interactions
Horsekeeping

It's okay, I'm not going to cut off their manes or anything.
Play
Note:
Horsekeeping (Complete)

Hm. If I become an expert at this, maybe my next name can be Weed-Cutter?
Play
Note:
The joke is aimed at the fact that some of Higekiri's names, including his current one, were given to him after a certain object was cut by his blade.
Sparring

Well, then, go ahead and practice your skills on this old hand.
Play
Note:
Sparring (Complete)

What happened? Why are you in a hurry?
Play
Note:
Citadel (Injured - Poke multiple times)

I thought it was going to be like this.
Play
Note:
Horse Equipped

Okay, then I will let you work in the battles.
Play
Note:
Omamori Equipped

hahaha, I should've been the ones to give protection.
Play
Note:
Special Lines❀
Welcome Back Greeting (After Long Absence)

Ooh, welcome back. Your shopping trip sure took a long time. Huh? That's not what you were doing?
Play
Note:
New Year's Greeting

Okay, okay, you want the New Year's money, right? Wait for a while.
Play
Note:
Omikuji

Are you drawing fortunes?
Play
Note:

Welcome, Oni! ... Huh, that's wrong?
Play
Note:
The normal 'catchphrase' for Setsubun is "Out with the Oni, in with the good fortune!" (鬼は外！福は内！), but Higekiri is welcoming or inviting the Oni instead.
Setsubun (After Casting Beans)

Supasupatto!
Play
Note:
This is a Japanese onomatopoeia for "to do something without effort", "easily", or "fast and efficient".
Spring Garden Flower Viewing

I wonder if there are any more hanami dango...
Play
Note:
Hanami dango, also called sanshoku dango or three-colored dango, is three sweetened rice balls on a skewer. Traditionally, each skewer comes in a combination of pink, white, and green rice balls. It is a common hanami snack.
Regiment Battle Team Change

Eh? It's been a year? Sure doesn't feel like it...
Play
Note:
Touken Ranbu's Second Year Anniversary (2017)

How happy. Long live the Genji! What kind of celebration is it again? Ah, it's the second anniversary, right.
Play
Note:
Touken Ranbu's Third Year Anniversary (2018)

It's the anniversary of your inauguration, huh. Yep, yep. As leader, carry on doing your best okay.
Play
Note:
Saniwa Second Year Anniversary

It's the second anniversary of your inauguration, huh. Yup yup, it's still not up to par with the generations of Genji yet, but aren't you doing your best?
Play
Note:
Saniwa Third Year Anniversary

It's the third anniversary of your inauguration, huh. You should be more like the generations of Genji (leaders), become great (just like them).,
Play
Note:
Saniwa Fourth Year Anniversary

I see, it's your fourth inauguration anniversary. If it's you, you might be able to go down in history like Genji.
Play
Note:
Saniwa Fifth Year Anniversary
Play
Note:

Retrieved from "https://touken-ranbu.fandom.com/wiki/Higekiri?oldid=154339"
Community content is available under CC-BY-SA unless otherwise noted.