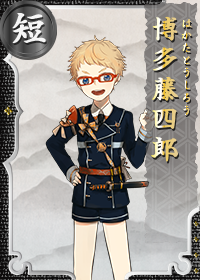 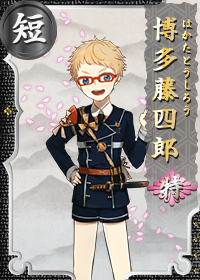 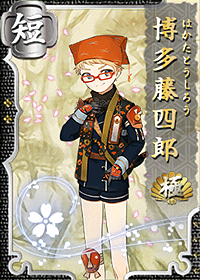 Toushirou tantous once enjoyed popularity as both status symbols as well as protection charms, and were highly sought after by many feudal lords. They were also bought and sold by merchants at the time to use for exchange of presents. Among those, the Toushirou that was obtained by a Hakata merchant would be me! Hakata Toushirou!
Play
Note:
Obtained

My name is Hakata Toushirou! Because I'm the Toushirou that was discovered in Hakata, I was named such. I might be a Tantou, but I am manly!
Play
Note:
Opening ❀
Login (Loading)

That seat, is it taken?
Play
Note:
Login (Complete)

Leave it to me!
Play
Note:
Citadel ❀
Citadel

Hakata is a nice place, why don't you go and visit sometime?
Play
Note:

Having many brothers is a good thing, but there are some strange ones... hmm? Why are you looking at me?
Play
Note:

He must have gone to Hakata.
Play
Note:
Citadel (Kiwame Prompt)

Would you hear me out for a second?
Play
Note:
Formation (Member)

Just leave it up to me!
Play
Note:
Formation (Captain)

This makes me happy.
Play
Note:

I'll be off then.
Play
Note:
Expedition (Complete - Leader of Expedition Party)

I'm off to get patched up!
Play
Note:
Repairs (Medium/Severe Injury)

Looks like I'll be needing some serious repairs... I'm off then.
Play
Note:
Refinery

Business is all about information!
Play
Note:
Sortie Kick-off

Fighting and business is not all that different!
Play
Note:
PvP

I can keep fighting 24/7.
Play
Note:
Both lines are a reference to this song.
Critical Hit

This is the best opportunity to invest.
Play
Note:
Minor Injury

One-on-one duels are out of fashion.
Play
Note:
Boss Node

This is a chance in a million.
Play
Note:
Victory (MVP)

My handsomeness went up by 50 points!
Play
Note:
Destroyed

I wonder how much I can sell these vegetables for.
Play
Note:
Fieldwork (Complete)

If I don't work hard these vegetables won't get sold.
Play
Note:
Sparring

I'm going to gobble you up!
Play
Note:
Sparring (Complete)

I was gobbled up instead~
Play
Note:
Ranbu Level❀
Citadel (Poke multiple times)

Whaddaya want from me, bothering me so many times...
Play
Note:
Citadel (Injured - Poke multiple times)

You don't have to worry... I'll get better if I just get some rest.
Play
Note:
Smithing (Complete)

Looks like we've got some kind of notice.
Play
Note:
Background Change

This is harder than I thought.
Play
Note:

Ah, so you're in this kind of place! I searched for you everywhere!
Play
Note:
New Year's Greeting

Before taking a fortune, we must first check the business, economic fortune and market price!
Play
Note:

Off to the Oni Extermination!
Play
Note:
Setsubun (Boss Node)

In with the fortune! In with the money.
Play
Note:
Setsubun (After Casting Beans)

If I gather up these beans, maybe I can make some sales.
Play
Note:
Regiment Battle Team Change

We've been together for a year? A big thank you for your usual patronage!
Play
Note:
Touken Ranbu's Second Year Anniversary (2017)

Ooh, one year has passed since your inauguration? As expected from my Master!
Play
Note:
Saniwa Second Year Anniversary

Congrats on your second anniversary! I'm counting on you from now on, too!
Play
Note:
Saniwa Third Year Anniversary

It's me, Hakata Toushirou, the tantou that went to Hakata to study commerce! I'm useful in an area different from the other Toushirou brothers!
Play
Note:
Obtained

I went and studied commerce! I'm gonna be useful in an area different from everyone else!
Play
Note:
Citadel ⚛
Citadel

Yep, it's important to exchange time with something.
Play
Note:

Tantou are tantou no matter what. But, that's not the case with commerce. If the bartering goes well, then a tantou won't end up as just a tantou.
Play
Note:
Citadel (Idle)

What are you exchanging for your time?
Play
Note:
Citadel (Injured)

Leave it to me!
Play
Note:
Formation (Captain)

This is so pretty.
Play
Note:

Should I wear this?
Play
Note:
Expedition

It's a new associate, should I go check?
Play
Note:
Troops Create

I'm off to get healed.
Play
Note:
Repairs (Medium/Severe Injury)

The head count is being exchanged for power.
Play
Note:
Mission (Complete)

Let's have a round!
Play
Note:
Resource Discovery

We're getting close to being in the black.
Play
Note:
Scouting

He who seizes IT seizes business.
Play
Note:
Sortie Kick-off

Training is about changing time into power.
Play
Note:
Attacking

Will this result in a worthy barter?
Play
Note:
Boss Node

If we win here we'll be in the black!
Play
Note:
Victory (MVP)

Selling vegetables is all about having quick transportation.
Play
Note:
Fieldwork (Complete)

Looks like these will make some small change.
Play
Note:
Sparring

Gonna gobble you up with the power of money.
Play
Note:
Sparring (Complete)

Don't worry... we're not going to start running a loss from this...
Play
Note:
Smithing (Complete)

This is a chance to make some money...
Play
Note:
Background Change

Let's move on to the next one! Next!
Play
Note:

Preparing for the unexpected is a fundamental of business.
Play
Note:
Special Lines⚛
Welcome Back Greeting (After Long Absence)

Oh, you're finally back! I was getting sick of waiting! You got some kind of side job? If it's a get rich quick scheme, let me in on it, eh?
Play
Note:
New Year's Greeting

Happy New Year! I'll be counting on you this year too!
Play
Note:
Omikuji

Before taking a fortune, we must first check the business, economic fortune and market price!
Play
Note:

Off to the Oni Extermination!
Play
Note:
Setsubun (Boss Node)

In with the fortune! In with the money.
Play
Note:
Setsubun (After Casting Beans)

If all these beans were coins, we'd be loaded!
Play
Note:
Regiment Battle Team Change

Today is our third anniversary. Our greatest thanks for your regular patronage!
Play
Note:
Touken Ranbu's Fourth Year Anniversary (2019)

It's already our fifth anniversary! This is a day worth celebrating. I'm glad we made it this far!
Play
Note:
Saniwa First Year Anniversary

Congratulations on the second anniversary of your inauguration? What kind of commemorative merchandise would be good? Just say the word!
Play
Note:
Saniwa Third Year Anniversary

Dear Master,
In order to become a big man, I have come to Hakata.
Even though I am a tantou, I have no intention of ending as a small man.
I intend to go back once I have learnt all I can in this fateful place.
But, what should I do after this?

Dear Master,
While I was wandering around, I spotted Lord Kuroda Tadayuki.
Lord Kuroda was one of my previous masters who bought me off from a merchant.
This must be some sort of fate.
Since this is a rare chance, I'll stay with him for a while.

Dear Master,
Lord Kuroda is a person who has a loose grip on his purse. Because of that, he caused a lot of problems.
Although in the end, it might be because of this character of his that made him buy me in the first place.
As I thought, the flow of cash is important. If we lose track of it, it will cause problems for the things that we have to do.
I have decided to learn trade from the merchants. If I do so, it should be of use to everyone.
I hope that you can think of this as an investment, and wait for my return.

Retrieved from "https://touken-ranbu.fandom.com/wiki/Hakata_Toushirou?oldid=154344"
Community content is available under CC-BY-SA unless otherwise noted.