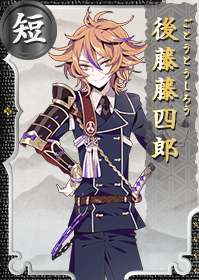 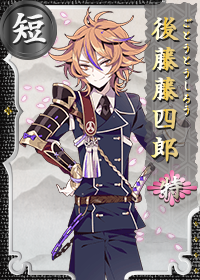 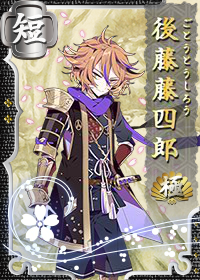 The name's Gotou Toushirou. I've got a lot of brothers, but among them I'm one of the tallest. If you're ever worried about the little guys, just tell me, yeah?
Play
Note:
Obtained

General. I have a favour to ask.
Play
Note:
Formation (Member)

Just leave it to me, General!
Play
Note:
Fatigue Recovery (One Bite Dango)

You know, when you eat sweet things, you feel all warm and fuzzy inside~
Play
Note:
Fatigue Recovery (Makunouchi Bento)

Thanks for the meal! Are there any seconds?
Play
Note:
Fatigue Recovery (Oiwaijuu Bento)

What a beautiful bento... Eh, we're allowed to eat it!?
Play
Note:
Equipment

It's good that you chose me, huh?
Play
Note:
Expedition (Complete - Leader of Primary Party)

I've got a good feeling about this!
Play
Note:
Repairs (Minor Injury)

With only this injury, it's not such a big deal
Play
Note:
Repairs (Medium/Severe Injury)

I'll come back in no time...Just wait a little
Play
Note:
Refinery

Just before the battle... number one is don't get nervous!
Play
Note:
Sortie Kick-off

As if I'd lose to you!
Play
Note:
Critical Hit

Guh... so this what they call do-or-die situation!
Play
Note:
Awakening

How is it, haven't I grown?
Play
Note:
Destroyed

This doesn't suit me somehow or other!
Play
Note:
Fieldwork (Complete)

I did it properly, you know? What d'you think?
Play
Note:
Sparring

Looks like the smithing is done.
Play
Note:
Repair (Complete)

Since we have this chance, a larger citadel would be nice!
Play
Note:
Troops Create (Failed)

Oops. Is this not good enough?
Play
Note:

Woah! What the heck is this?
Play
Note:

It's not working out well.
Play
Note:
Horse Equipped

It's nice that your field of sight gets higher when you ride a horse!
Play
Note:
Omamori Equipped

Got it! I swear on this amulet that I'll come home safe!
Play
Note:
Special Lines❀
Welcome Back Greeting (After Long Absence)

Happy New Year! This year for sure, I'll get taller!
Play
Note:
Omikuji

Straight line towards the head of the Oni!
Play
Note:
Setsubun (Boss Node)

The flowers are blooming beautifully, but it's still chilly out so take care of yourself, 'kay?
Play
Note:
Regiment Battle Team Change

It's been a year since the battle started, huh! Hehe, thanks!
Play
Note:
Touken Ranbu's Second Year Anniversary (2017)

The day of our fourth anniversary has come. It's nice that we can celebrate this every year!
Play
Note:
Play
Play
Touken Ranbu's Fifth Year Anniversary (2020)

Wow, we succeeded in making it to our fifth anniversary! Feels like we're finally getting somewhere!
Play
Note:
Saniwa First Year Anniversary

One year inauguration anniversary huh! Let's make the next year a good one too!
Play
Note:
Saniwa Second Year Anniversary

Congratulations on your second year inauguration anniversary! Take care of me from now on too!
Play
Note:
Saniwa Third Year Anniversary

Congratulations on your third anniversary! This is the result of how hard you've worked up to now!
Play
Note:
Saniwa Fourth Year Anniversary

Whoaa! It's your fifth anniversary, General! That's not something just anyone can do!
Play
Note:
Introduction ⚛
Event
Translation
Audio
Book Description

I'm the Gotou Toushirou that went out to Owari and came back with newly gained pride as a mamorigatana. If there's anything bothering you, General, I'll see it solved!
Play
Note:
Obtained

Hey, do you wanna chat a little?
Play
Note:

I just wish I were a bit bigger..
Play
Note:

Hey! What do you think about taking a road trip someplace?
Play
Note:
Citadel (Idle)

Subordinates for me? ... No problem, protecting is my specialty!
Play
Note:
Fatigue Recovery (One Bite Dango)

Thanks for the provisions! My stomach is delighted!
Play
Note:
Equipment

I'll pull a great feat with this one!
Play
Note:

What do you think, General? Does it look good on me?
Play
Note:

Hey, this is nothing.
Play
Note:
Repairs (Medium/Severe Injury)

Ugh... I kinda messed up this time...
Play
Note:
Refinery

Looks like a mission's been completed.
Play
Note:
Battle Record

Take your time and size them up.
Play
Note:
Sortie Kick-off

Not done yet!
Play
Note:

There there. Thanks as always.
Play
Note:
Horsekeeping (Complete)

Now I don't need to worry as much about falling down.
Play
Note:
Fieldwork

Wha-what's with this... it hurts...
Play
Note:
Smithing (Complete)

A strong and cool citadel would be nice!
Play
Note:
Troops Create (Failed)

Woah! It's a failure.
Play
Note:

It's not working out well.
Play
Note:
Horse Equipped

It's nice that your field of sight gets higher when you ride a horse!
Play
Note:
Omamori Equipped

Got it! I swear on this amulet that I'll protect everyone!
Play
Note:
Special Lines⚛
Welcome Back Greeting (After Long Absence)

Hey General, what kind of year will this year be?
Play
Note:
Omikuji

In with the Oni... Wait, no, out!
Play
Note:
Spring Garden Flower Viewing

The day of our fourth anniversary has come. It's nice that we can celebrate this every year...... I can feel that I'm actually living in this form.
Play
Note:
Play
Play
Touken Ranbu's Fifth Year Anniversary (2020)

Wow, we succeeded in making it to our fifth anniversary! We're gonna keep moving forward to our next goal!
Play
Note:
Saniwa First Year Anniversary

It's been a year since you've come here, General. Here's to the future!
Play
Note:
Saniwa Second Year Anniversary

Congratulations on your second anniversary. Should I give you a shoulder rub today or something?
Play
Note:
Saniwa Third Year Anniversary

Congratulations on your third anniversary. I won't lose to you in working hard, General!
Play
Note:
Saniwa Fourth Year Anniversary

Whoaa! It's your fifth anniversary, General! As your sword, I can't help but puff up with pride!
Play
Note:
Letters✉
First Letter✎

Dear General
Hey General. You're doing well? I'm currently in the middle of training.
... is what I want to say, but what should I actually do in a training?
I requested for a training because I wanted to be a great and dependable man like Ichi-nii, however...
just when I thought I'd surely be brought to a battlefield, aren't the wars long over in this era.
Well, if we're talking about memories, a lot remains in this Owari Domain though.

Dear General
You see, the me of this time came to Owari as a wedding gift for Lady Chiyohime.
It's because we Toushirou brothers were highly treasured as mamorigatana.
However... there's not really any anecdote about me in the battlefield.
That's why maybe the reason why we were so valued as mamorigatana was because of my little brothers in Lord Ieyasu's possession.
No, I don't think it's like that, right.
Even if I have no notable anecdote, I should acknowledge my own good qualities.

Dear General
... is that so. When I think about it, Lord Iemitsu's only remaining bloodline is from Lady Chiyohime's bloodline.
I wonder if it'll be okay for me to think that it's because I tagged along with her to Owari.
Of course it's not because of any direct action from me.
But, speaking of results, I did a fine job for a mamorigatana, didn't I?
Hehe, when I think of it like that I feel much better.
I can get on with being a mamorigatana. That's why now I have to properly protect General.
Alright, I'm going home soon!

Retrieved from "https://touken-ranbu.fandom.com/wiki/Gotou_Toushirou?oldid=171947"
Community content is available under CC-BY-SA unless otherwise noted.