Each sword has base stats for both their base form and Toku upgrade. Stats can be further raised through refining them and completing Internal Affairs, up to a maximum cap specified in parentheses on each sword's individual page.

Note that battle performance is not based on a sword's stats alone. The level also serves as a addend to their attack, defense, mobility, etc. For instance, a Lv50 Tantou will perform better in combat than a Lv10 Ootachi, even though the Ootachi's listed stats are much higher than the Tantou's.

When you go out on a sortie/expedition/PVP, your team's total stats will be showed in a little bar graph in this order, plus another stat:

When you begin a sortie, your leader will scout for the enemies's troops. His success is dependent on how high the team's Scouting is overall. If the leader succeeds in his scouting phase, the game will indicate the enemy's battle formation, and which formations will be advantageous (有利) or disadvantageous (不利). 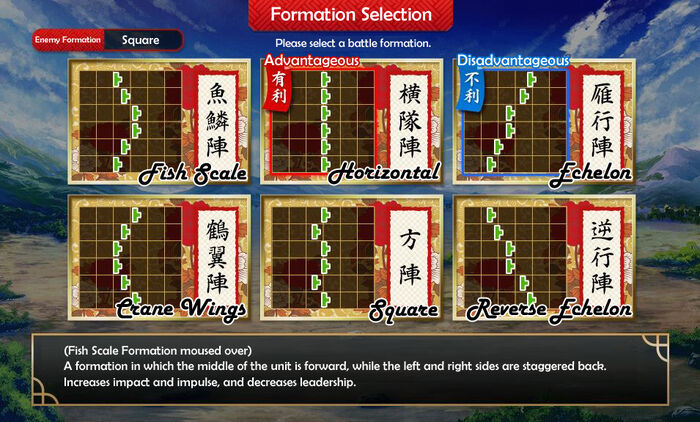 Advantageous (有利): The formation with this frame will increase Leadership, in addition to the bonuses and losses granted by the pattern chosen.

Disadvantageous( 不利): The formation with this frame will decrease Leadership, in addition to the bonuses and losses granted by the pattern chosen.

If the scouting is unsuccessful, the game will notify you in purple text, and you will be allowed to choose one of the six formations, but with no knowledge of what is advantageous or disadvantageous.

If either team has swords equipped with long-range attack troops (Archers, Catapult Soldiers, or Musketeers), the battle will begin with the Long-Range Attack phase. These troops will always attack in the same order:

Starting from Map 3-1 onwards, enemy teams will always have at least one type of long-range attack troop equipped.

From here, each sword has two turns to attack. The order in which swords and enemies will attack is determined by their Mobility (機動) stat. The sword with the highest mobility will attack first, and the battle will proceed from there. Occasionally, your sword may land a critical hit (会心の一撃), which does bonus damage and pushes the enemy formation backwards.

After two turns, if there are still viable party members, the victor is determined by the amount of damage dealt to each party member and their troops. The battle also automatically ends if either side loses all party members, or if the team is pushed all the way back to the far sides of the screen.

When your sword becomes moderately or severely damaged, it has a chance to enter an Awakened state (真剣必殺), which is signalled by a cut-in screen with a unique CG sprite. Afterwards, your sword gets an extra attack round, and will always deal critical hits.

Awakened state will only last for the duration of the battle, and does not carry over to subsequent battles (unless triggered again). More than one sword can trigger Awakening within the same battle.

Once a sword enters his Awakened state, other moderately or severely damaged swords have a chance to trigger the Shinken Hissatsu too. It's possible to have multiple chained awakening triggered at one time.

If one team contains at least one Uchigatana and one Wakizashi, there is a chance of triggering a Double Attack during any battle. Any combination of Wakizashi and Uchigatana are possible.

First, the Wakizashi attacks to peel off the enemy's troops. Then, the Uchigatana follows-up with an attack to the now defenseless enemy. It is a powerful attack whose effectiveness increases the higher the enemy's Leadership status.

The probability of activating Double Attack is determined by the swords' Killing Blow stat. Unlike Shinken Hissatsu, the swords do not need to sustain damage to trigger Double Attack.

When entering the battle, if your team is pushed all the way back to the far left edge of the screen and both team captains are still able to battle, the game may initiate a 1-on-1 duel (一騎打ち). There will be a cut-in screen, followed by your leader and the enemy leader attacking each other. If you win the duel,  you will win the entire battle, regardless of the remaining total HP of your team, and earn a special Rank S duel ranking.

By default, all battles take place under clear, daytime conditions in an open battlefield. Occasionally, in certain Worlds and Battlefields, there may exist special battlefield conditions that will influence the flow of the battle. Changes can include making some sword types advantageous or disadvantageous for battles, disabling the effects of Horses, or reducing the ranges of Ootachis and Naginatas.

All battlefields in Memory of Ikedaya except the boss node of [Ikedaya Inn 1F 3rd Map] take place at night. Night battles proceed just like normal battles, except Tachis, Ootachis, Yaris, and Naginatas will suffer from a significant stats disadvantage, while Tantous and Wakizashis will be at an advantage. Additionally, all player and enemy swords have the chance to evade Musketeer, Catapult, and Archer attacks during the long-range attack phase, making it possible to achieve Rank S in this map.

It is highly advised to bring Tantous, Wakizashis, or Uchigatanas that are at least Level 40 to Memory of Ikedaya, because the stats modifications are significant enough that even Level 99 swords that are at a disadvantage in night battles will struggle to deal damage, and be more susceptible to taking damage. Tantous gain an even greater stat boost than Wakizashis, but their low Survival can be a problem, as enemy Yaris always do a fixed amount of damage (7-9HP). Meanwhile, Wakizashis and Uchigatanas both have higher Survival and more troop slots, but do not perform as well in battle as Tantous do.

The battles in Memory of Ikedaya: Kyoto (Within the City) and Sanjou Oohashi are also considered "urban battles." In narrow, urban areas, the status boosts gained from equipping Horses is disabled. Note that swords may still equip horses, but the bonuses will not take effect during urban battles.

The battles in Memory of Ikedaya: Ikedaya Inn 2F and every node except the boss node of Memory of Ikedaya: Ikedaya Inn 1F 3rd Map take place indoors. Because the battles are set within a narrow, indoor space, the status boost from equipping Horses is disabled. Just like urban battles, swords may still equip horses, but the bonuses will not take effect during indoor battles.

Because of their large sizes, Ootachis and Naginatas cannot maneuver well indoors and have their effective ranges reduced to 1 (e.g. they may only attack one enemy at a time).

Certain nodes in the various routes of Memory of Enkyou: Edo (Within Edo Castle) take place within the castle. Due to being restricted by the high, sturdy castle walls, the status boost from equipping Horses is disabled. Just like in urban and indoor battles, swords may still equip horses, but the bonuses will not take effect during indoor battles.

Because of their large sizes, Ootachis and Naginatas cannot maneuver well within the castle and have their effective ranges reduced to 1 (e.g. they may only attack one enemy at a time).

Musketeers, Catapults and Archers can be equipped, but will not attack during the long-range attack phase of any battles within castle confines. Their stat bonuses still apply.

The battles in Memory of Enkyou: Edo (Shirokanedai) are urban battles that also occur in heavy rain. Due to the rain, Musketeers can be equipped, but will not attack during the long-range attack phase. Catapults and Archers will function normally.

Swords will break if they hit 0HP, removing them from your team and destroying them permanently. However, another of the same sword can still be re-obtained through drops and smithing. Incidentally, swords cannot be broken in PvP, only on the Front Lines.

If a sword is at moderate damage or above, receiving what would otherwise be a fatal amount of damage will instead simply send them to 1HP and push the sword to the back, where they cannot be attacked by enemies for the remainder of the battle. However, should you continue onto the next battle node, the sword will be again at the front lines and will break if it sustains fatal damage.

Omamori can prevent swords from breaking in a single battle. If a sword equipped with an omamori is broken in battle, the omamori will be consumed to immediately revive the sword with 1HP (Omamori) or max HP (Omamori Kyoku). A sword already broken and revived in battle with an omamori will not be destroyed again in the same battle, even if it is attacked again.

The player and the swords receive experience points, with bonuses being awarded for achieving MVP status, for being the leader, and for achieving specific rankings.

Experience gained is calculated by:

Retrieved from "https://touken-ranbu.fandom.com/wiki/Combat_Mechanism?oldid=179552"
Community content is available under CC-BY-SA unless otherwise noted.