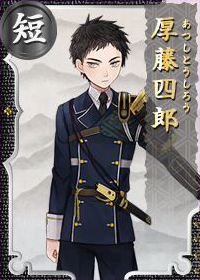 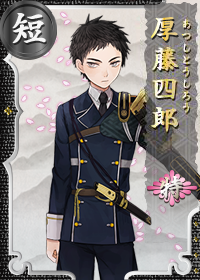 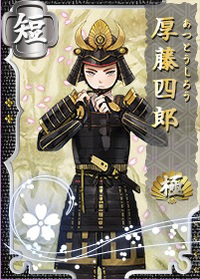 Alley.... oop. I am, Atsushi Toushirou. Because my main feature is that of straight, moreover thick edge, among my brothers I'm classified as Yoroidoushi.
It's not that I'm boasting, but since a lot of my successive owners are renowned commanders, I'm just slightly famous.
My name's sometimes "Atsu" or "Atsushi" depending on the literature, but I'm still me. Don't worry too much about it.
Play
Note:
Yoroidoushi (armor piercer) is a type of tantou which was made for piercing armors, as well as for stabbing while grappling in close quarters.
Obtained

Alley...oop. I am Atsushi Toushirou. Among my siblings, I am classified as Yoroidoushi.
Play
Note:
Opening ❀
Login (Loading)

Ah, is it my turn soon?
Play
Note:
Login (Complete)

Hey General, I have a request.
Play
Note:
Formation (Member)

Leave it to me!
Play
Note:
Formation (Captain)

You trying to win my brothers over like this? General?
Play
Note:
Fatigue Recovery (Makunouchi Bento)

This is it!
Play
Note:

So I just have to use this?
Play
Note:

I tried to make something like this!
Play
Note:
Repairs (Minor Injury)

Oh. I'll try to get repaired as soon as possible.
Play
Note:
Refinery

Have you decided what you're going to buy, General?
Play
Note:
Front Lines & Battles❀
Front Lines

I'm counting on you for recon! Intel is the key to battles, after all.
Play
Note:
Sortie Kick-off

Alright then, we'll be treating this as practicing with a strong opponent!
Play
Note:
Attacking

Once I bring this to a grapple, you're mine for the taking!
Play
Note:
Referring to how he's used as a yoroidoushi.
Minor Injury

Dammit! Getting beaten up like this...!
Play
Note:
Awakening

No matter how much I get beaten up, now that I've come this close, it's my win!
Play
Note:
Referring to how he's used as a yoroidoushi.
Duel

Haha~h, if this turns into a one-on-one fight, I’ll win in no time!
Play
Note:
Boss Node

Now that I've gotten stronger, just leave it to me!
Play
Note:
Destroyed

The horses here sure are good ones.
Play
Note:
Fieldwork

It's good to do some farming once in a while.
Play
Note:
Fieldwork (Complete)

That was a good change of pace.
Play
Note:
Sparring

I'm going all out, so I'm counting on you to as well!
Play
Note:
Sparring (Complete)

It's not easy to bring it to a distance I'm good at.
Play
Note:
Ranbu Level❀
Citadel (Poke multiple times)

Is the smithing about to be finished?
Play
Note:
Repair (Complete)

Are the repairs about to be finished?
Play
Note:
Specific event banner introduction

Seems like some kind of event.
Play
Note:
Background Change

Oh yeah, remodelling once in a while is nice too.
Play
Note:
Troops Create (Failed)

Where did it go wrong?
Play
Note:

Just because it's New Year's doesn't mean you can laze around too much, 'kay?
Play
Note:
Omikuji

Fortune slips, huh? I wonder what you'll get.
Play
Note:

There it is! Great luck.
Play
Note:
Setsubun (Entering Map)

Out with the Oni!!
Play
Note:
Setsubun (After Casting Beans)

Well, it's the leader's duty to just watch and generously let everyone clamor around during a celebration, right?
Play
Note:
Touken Ranbu's Second Year Anniversary (2017)

This makes five years for us. Not that that changes anything. We're still counting on you!
Play
Note:
Saniwa First Year Anniversary

Oh, is today your inauguration's first anniversary? What a joyous occasion! In addition to this last year, please take care of me for many years to come, General!
Play
Note:
Saniwa Second Year Anniversary

Oh, is today your inauguration's second anniversary? What a joyous occasion! I'm counting on you from now on, too!
Play
Note:
Saniwa Third Year Anniversary

It's the third anniversary of your inauguration, General! Ahaha, did you forget?
Play
Note:
Saniwa Fourth Year Anniversary

Look at my new form, General! I'll continue to support you however I can!
Play
Note:
Citadel ⚛
Citadel

General is still so unreliable...... Well, it will be fine as long as I'm supporting you!
Play
Note:

General should just focus on the big picture! Leave the details to your subordinates!
Play
Note:

Ah...hmm, isn't it fine to act more commanding? If General is not composed, everyone will get restless!
Play
Note:
Citadel (Idle)

General, is it fine to do nothing?
Play
Note:
Citadel (Injured)

Listen here, General. If you don't take good care of your subordinates, you're going to have a hard time later.
Play
Note:
Citadel (Kiwame Sendoff)

General, you don't have to worry. Let's wait for him to come back with a smile.
Play
Note:
Formation (Member)

Leave it to me, General!
Play
Note:
Formation (Captain)

No way. You can't manipulate me with sweets... Well, whatever...
Play
Note:
Fatigue Recovery (Makunouchi Bento)

So that's how it comes!
Play
Note:

I just hope this will actually be enough as support...
Play
Note:
Expedition (Complete - Leader of Primary Party)

How's this, General! The equipment I made!
Play
Note:
Repairs (Minor Injury)

Sorry, General... Let me rest for a while.
Play
Note:
Refinery

General, shouldn't it be better to confirm it now rather than leave it for later?
Play
Note:
Battle Record

General? Look at this, and decide your future goals.
Play
Note:
Merchant

If you splurge without thinking, you'll be in big trouble later. So be careful, okay?
Play
Note:
Front Lines & Battles⚛
Front Lines

From what we found out through scouting... hmm...
Play
Note:
Sortie Kick-off

Practice is important, you know? If we don't try out combinations at least once, it won't work in the real run.
Play
Note:
Attacking

It's just a scratch!
Play
Note:

To be beaten up so badly...! I won't forgive them!
Play
Note:
Awakening

It took me some work to take them in a grapple...! With this, victory is mine!
Play
Note:
Duel

I get the feeling it's a bad idea to throw away tactics in favor of an individual attack... but I have to do this!
Play
Note:
Boss Node

This is it...I'm itching for a fight!
Play
Note:
Victory (MVP)

General, wasn't it great you left it to me?
Play
Note:
Destroyed

General, now's not the time to cry...! Reform the formation quickly...! Prove that you can win, even if I'm no longer around...!
Play
Note:
Internal Affairs⚛
Please go here for special Internal Affairs interactions
Horsekeeping

Hmm, with this they should listen to me.
Play
Note:
Fieldwork

It would be great if the harvest was bountiful!
Play
Note:
Sparring

I'll be going at full strength, so please take care of me!
Play
Note:
Sparring (Complete)

Even when off-duty, I have to take care to not set a bad example.
Play
Note:
Citadel (Injured - Poke multiple times)

...General...I'm fine with talking to you, but are you fine with delaying my repairs?
Play
Note:
Smithing (Complete)

Looks like the smithing is done!
Play
Note:
Repair (Complete)

A notice for an event has arrived. Whether we'll be participating or not depends on you.
Play
Note:
Background Change

...it was so close to being done.
Play
Note:

Ah, this is a nice horse!
Play
Note:
Omamori Equipped

Nah, I don't need any New Years money, you know? Don't treat me like a kid.
Play
Note:
Omikuji

Fortune slips, huh? I wonder what you'll get.
Play
Note:

There it is! Great luck.
Play
Note:
Setsubun (Entering Map)

Out with the Oni!!
Play
Note:
Setsubun (After Casting Beans)

I don't think there are any more Oni around here?
Play
Note:
Spring Garden Flower Viewing

What! I'm already looking at the flowersーI'm definitely not getting sleepy or anything!
Play
Note:
Regiment Battle Team Change

Man, it seems like a long time, but it was all over in a flash. I'll be counting on you from here on out!
Play
Note:
Touken Ranbu's Third Year Anniversary (2018)

It's our third year. Let's aim to make it through the next year with our hard work!
Play
Note:
Touken Ranbu's Fourth Year Anniversary (2019)

Fourth anniversary, huh...... We sure have been fighting for a long time. I think it's that worthwhile.
Play
Note:

Continue to lead us, alright?
Play

This makes five years for us. We celebrate the anniversary every year, but making it to the fifth one feels pretty special.
Play
Note:
Saniwa First Year Anniversary

General, congrats on your second anniversary! I'm counting on you from now on till forever!
Play
Note:
Saniwa Third Year Anniversary

General, this marks your fourth inauguration anniversary! The preparations for the celebration are complete, of course!
Play
Note:
Saniwa Fifth Year Anniversary

General, it's finally your fifth anniversary! You're the only one who can lead us. We're counting on you!
Play
Note:
Letters✉
First Letter✎

Dear General,
Now, I have arrived in Chikuzen.
That's right--as you might have guessed, I am currently with one of my previous owners, Kuroda-sama.
Since I have arrived at Kuroda-sama's, who is well known for his ingenuity,
I intend to learn some know-how of strategy before returning.
Do look forward to my training results!

Dear General,
Well... As expected, it seems like learning from Kuroda-sama is quite difficult.
I did not expect it to be easy,
but it's still a bit depressing when my thinking process cannot match up to him.
Nevertheless, I was prepared for this training to be grueling;
I can't be in low spirits just for something like this!
Therefore, it will still be a while before I can return.
I just hope that my younger brothers aren't being reckless when I'm not around.

Dear General,
My training is more or less complete, so I will be returning.
My training on strategy is... well, it's so-so. But, I have done all I could.
Furthermore, I have learned something--and that is the handling of vassals.
As expected, for those who stand at the top, the quality of work that can be achieved
is affected by the way one manages to grasp the heart of their vassals.
In relation to this, because of how my younger brothers and I are, we intuitively understand.
While I do think that you, General, do pretty well on this point,
the current me can provide support in areas
that are out of your reach. Do look forward to it.

Retrieved from "https://touken-ranbu.fandom.com/wiki/Atsushi_Toushirou?oldid=154402"
Community content is available under CC-BY-SA unless otherwise noted.